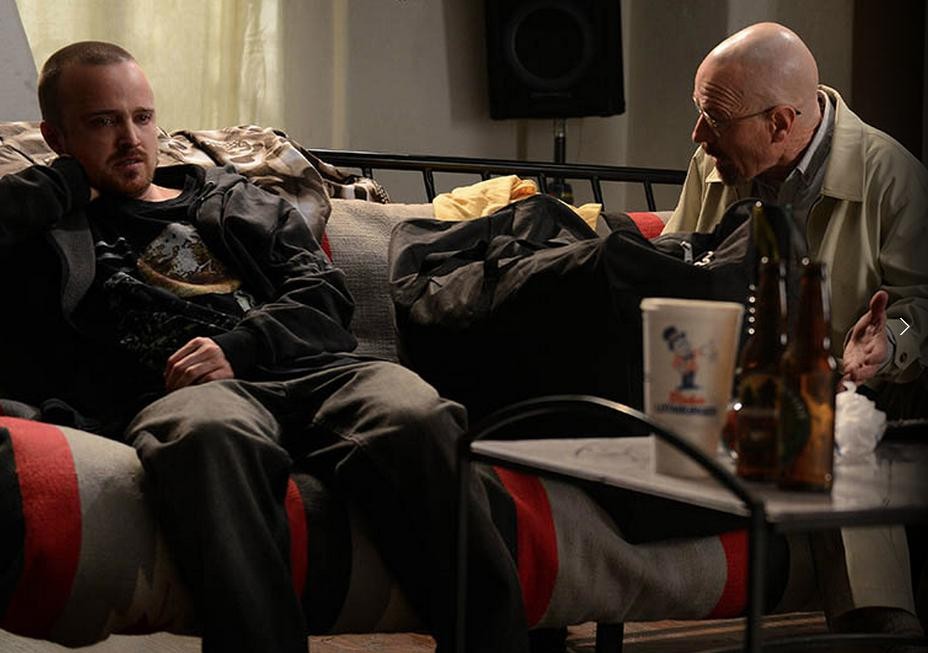 The heroism involved in staying put in spite of it all is the heroism of a cockroach, which also won’t be driven out of the bathroom. – Franz Kafka

Whether idly crawling along a cement wall in the mid-season finale or scurrying across a glass table in Sunday’s premiere, the cockroach is one of the most undeniable symbols of the  final season of AMC’s Breaking Bad.

Walter White returns to a boarded-up, run down shell of a home in the opening moments of “Blood Money,” the first of the series’ final eight episodes. As he breaks through the front door and into the living room he once knew, Walter sees trash strewn about, a room devoid of furniture and the word 'Heisenberg' spray-painted across the wall. He walks to the bedroom and removes the last vestige of his former life—the ricin hidden inside the outlet by his bed.

Flashing back to the present storyline, the romanticized vision of a life outside the drug game, one where Walter returns to his old life working comfortably behind the register of a car wash, collapses rather quickly.

Hank’s recent discovery in the White’s bathroom finds him ultimately playing the foil to Walter’s alter ego. He's even given his own classic Breaking Bad montage sequences as he sleuths in the garage, an editing style usually reserved for Walter's meth cooking. Hank’s panic attack in response to learning his brother-in-law’s true identity has him crashing cars, side-stepping his wife Marie’s inquiries and taking the ol’ one-track-mind approach back to the Heisenberg case.

At the end of the premiere, as the garage door closes behind Walter, he notes how he does not like the menacing way Hank looks at him. It isn’t long until the tables turn and Hank shrinks in disbelief as Walt channels Heisenberg and advises his brother-in-law to “tread lightly.”

“Blood Money” returns at full clip, still suspenseful and agonizing but brilliantly tearing through plot lines that could easily have been pushed to the final two or three episodes. The fact that Hank and Walter know where one another now stand, with seven episodes remaining, story lines are sure to spiral in ways no one can predict—in true Breaking Bad fashion.

Oh, and yes, I almost forgot about Jesse. He’s depressed again, slinging stacks of money out of his car window in seedy neighborhoods. Most importantly though, his skepticism towards Walter’s fairy tale spun about former partner Mike’s getaway may be the final straw in his growing resentment towards his former partner and teacher.

The long-haired, flash-forward Walter proves that he has still not met his end, effectively surviving this present storyline. But as evident as the worn lines on the tired face he sees in the mirror, time does not find him well.

Kafka’s follows the aforementioned quote with an anxious belief that outside the walls of his home, waiting, are police in riot gear ready to charge with drawn bayonets. Will Walter be so lucky?

What are your opinions on the mid-season return? Is the ricin meant for Hank, Jesse or Walter himself?