Brendan Gleeson Carries Pitch-black ‘Calvary,’ Weighed Down by the Rest 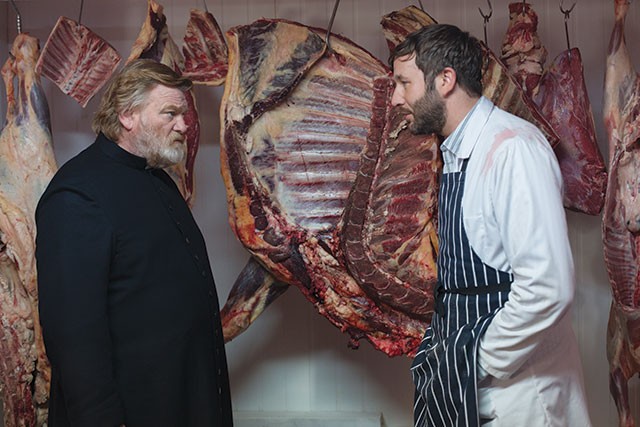 Father James (Brendan Gleeson) sits in a confessional, waiting. An unseen man enters the box and says, “The first time I tasted semen, I was seven years old.”

Father James’ expression—something akin to dispassion, but maybe just fatigue—barely changes. He asks whether the parishioner has anything to confess, and after an uncomfortable back and forth, the parishioner tells Father James that he plans to kill a good priest—Father James—in retaliation for the church’s abuses. Set your affairs in order, says the man, and meet me on the beach next Sunday morning.

Thus begins Calvary, writer-director John Michael McDonagh’s pitch-black comedy (and to a degree, murder mystery). It’s a ballsy way to start a story that has as much humor as Calvary does. One doesn’t jump from child rape to casual guffaws easily, but McDonagh pulls it off.

The main reason for Calvary’s overall success is Gleeson. The imposing actor has a history of playing occasional leads, but he’s mostly been used in supporting roles, often as heavies and cops. McDonagh uses Gleeson’s natural gravitas and buried warmth to good effect, developing Father James as a well-rounded, complex, difficult figure, full of humor and pain, devotion and angst. Nothing short of magnificent, Gleeson will be in contention to reap his share of awards at year’s end.

If only the supporting characters were sketched out so well. It’s no fault of the actors that the smaller roles seem smaller, but they also seem designed to move the story forward or act as red herrings more than they’re designed to be real people.

Then there’s the town butcher, Jack (Chris O’Dowd), who may or may not be beating his wife, Victoria (Orla O’Rourke), an unapologetic and flagrant adulterer. She’s having an affair with the town mechanic (Isaach de Bankolé; nice to see him outside a Jim Jarmusch movie).

And don’t forget the local cop (Gary Lydon), the angry barman (Pat Shortt), the asshole multimillionaire (Dylan Moran, quietly brilliant), the atheist doctor (Aidan Gillen, hamming it up), the American writer (M. Emmet Walsh), the kid who wants to get laid (Killian Scott), the serial killer rotting in a nearby prison (Domhnall Gleeson) and the accident victim’s widow (Marie-Josée Croze).

That’s a lot of supporting characters for a movie that barely clocks in at 100 minutes. And that would be fine and dandy if Calvary weren’t so interested in getting at certain deep questions—how does one person, or town, or church deal with the mass of abuse and suffering that the church has been covering up for years? Such an inquiry needs more than archetypes. They serve their purpose, as devices for Father James’ struggle about what to do regarding his impending murder, but they seem like clunky obstacles to maneuver around and puzzles for him to solve before he reaches the truth of his decision.

Calvary works better when Father James is the focus. For example, halfway through his week—the days are ticked off on screen, a spiritual twin to the ticking clocks in High Noon—someone sets his church on fire. The following night, someone assaults his beloved dog. Father James, in a telling moment, is more interested in his dog’s health than the smoldering ashes of his church.

There’s a scene toward Calvary’s end when Father James is berating fellow priest Father Leary (David Wilmot) for his lack of integrity—“It’s the worst thing I can say about a person”—and it’s an interesting counterpoint to Father James’ internal struggle.

Will he be the stand-in for this killer and answer for the church’s crimes? Is he trying to save a lot of pissant drunks and fools who aren’t worthy of salvation? And who killed his dog? Why does he care about that more than the sins of other priests?

Which questions Father James chooses to answer—literally and figuratively—aren’t hard to guess as the movie marches toward its inevitable conclusion. And the confessional threat-maker’s identity won’t be hard to grasp, either. Still, there’s something wonderful working in Calvary despite its clichéd murderer’s row of cretins, creeps and malcontents. And, importantly, it leaves lots of questions unanswered in a time when movies err on the side of spelling everything out.