Breweries and Distilleries in San Antonio

Gone are the days when Bud Light and Shiner seemed like San Antonio’s only drinking options. Thanks to a decade-long boom in craft breweries and distilleries, the city’s now awash locally produced specialty beers and spirits ranging from Texas-style whiskey to apricot brandy. No matter your level of drinking expertise — beginner, intermediate or advanced — this list will direct you to local breweries and distilleries that open their doors to the public.

Busted Sandal Brewing Company
This veteran-owned brewery opened in 2013, offering sustainable brews made with local ingredients and offering variety of styles including Mexican lagers, light ales, balanced IPAs and chocolatey porters. Its offerings can be enjoyed alone or paired with food from the kitchen. Bring a friend or your favorite furry pal for an impromptu tour or sample the Ultimate Chancla Flight, which includes nine house beers. 7114 Oaklawn Dr., (210) 872-1486, bustedsandalbrewing.com.

Alamo Beer Co.
No trip to San Antonio’s near East Side is complete without a stop at Alamo Beer Co. The landmark brewery, located next to Hays Street Bridge, began with a golden ale in 2014, and has since grown to include pilsners, lagers and ales. Enjoy some of its widely available products plus an array of seasonal beers at its beer hall. And don’t forget the bites, live music and weekly tours. 202 Lamar St., (210) 872-5589, alamobeer.com.

Freetail Beer Co.
Don’t be fooled by its strip mall exterior, Freetail is home to a modern production brewery with a serious selection of eats and drinks. Stop by the taproom on South Presa for free Saturday tours or visit its far Northside brewpub for a selection of wood-fired pizzas and savory sandwiches to go with its array of specialty suds. 4035 N. Loop 1604 #105, (210) 625-6000, freetailbrewing.com.

Blue Star Brewing Co.
Housed in the Blue Star Arts Complex, this friendly Southtown brewpub offers 10 organic brews, all made in house. Its heart-of-Southtown location makes it an ideal place to meet friends before or after checking out galleries, taking in a live music show or refueling after a bike ride on Mission Trail. 1414 S. Alamo St., Suite 105, (210) 212-5506, bluestarbrewing.com.

Roadmap Brewing
Former teacher Dustin Baker turned his home brewing hobby into a second career when he opened Roadmap Brewing in 2018. Since then, Baker has stayed busy creating brews like the Wake Up Call, a coffee-centric stout, Blackberry Squeeze, a kettle sour, and the crushable, balanced pilsner aptly named “Alright, Alright, Alright”. Though there’s no kitchen, the brewery often hosts a variety of local food trucks to pair with your drink of choice. 723 N. Alamo St., (210) 254-9962, roadmapbrewing.com. 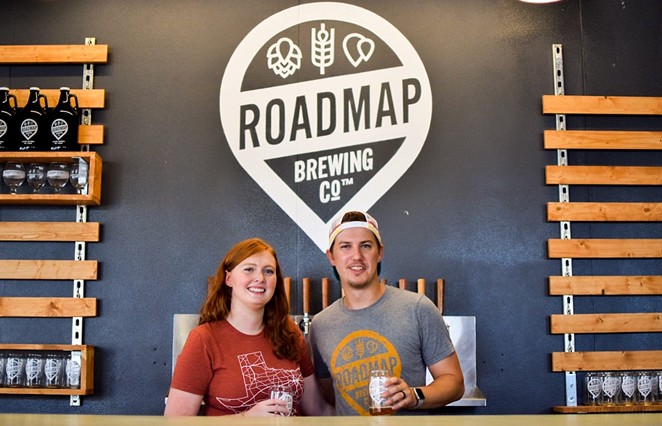 Southerleigh Fine Food and Brewery
When Head Brewer Les Locke arrived at Southerleigh in 2014, he helped usher in a new era of beer at the historic Pearl Brewery. You can sit at the bar to sample brews like the ever-evolving Darwinian IPA or the Sunshine in a Dust Storm, a citrusy and balanced sour. To get a better view of the brewing process, simply look up, as brewers mix and tap beers on the second floor. 136 E. Grayson St #120, (210) 455-5701, southerleigh.com.

Weathered Souls Brewing Co.
You can’t get much closer to the brewing process at Weathered Souls without becoming a brewer yourself. Visit the taproom for a wide variety of beer styles including hoppy pale ales such as the Hopty Dance, light lagers including Duel in the Sun and dark, silky stouts like the BA Chocolate Bon Bon. Weathered Souls serves up brews, bites and community all in one place. 606 Embassy Oaks #500, (210) 313-8796, weatheredsouls.beer.

Dorćol Distilling + Brewing Co.
Owners Boyan Kalusevic and Chris Mobley brought rakia, a Serbian, apricot-based brandy, to Southtown in 2013. Located in the growing Lone Star Arts district, Dorcol has become a community hub for local art events and thoughtfully crafted cocktails where its rakia is the star. The beloved spot is also home to HighWheel Beerworks, whose offerings include the Betty, a crisp Kölsch, the hoppy HighWheel 56 and an ever-changing selection of small-batch options. 1902 S. Flores St., (210) 229-0607, dorcolspirits.com.

Maverick Whiskey Distillery & Brewery
You’ll find the standard order — a beer with a shot chaser — at almost any bar in Texas, but at Maverick, the combo becomes a special imbibing experience. Named for Texas revolutionary Samuel Maverick, the downtown drinking establishment offers a rare, first-hand look at craft brewing and distilling with weekly tours and tastings or a visit to a full-service restaurant. 115 Broadway St., (210) 447-7010, maverickwhiskey.com.

Ranger Creek Brewing & Distilling
The North San Antonio brewstillery has been serving up craft beers and award-winning Texas whiskies since 2010. Ranger Creek’s special tours include a detailed look behind the scenes at both its beer and whiskey operations. A tasting room allows visitors to sample its wares, including seasonal and small-batch options not available through retailers. 4834 Whirlwind Dr., (210) 339-2282, drinkrangercreek.com.

Back Unturned Brewing Co.
Back Unturned splashed onto the local beer scene in late 2019, bringing funky and easy-to-drink suds to downtown San Antonio. Owner and head brewer Ricardo Garcia has made every aspect of the beermaking process transparent and accessible, from barrel to the glass. The ever-evolving lineup includes the Redhead in the Hay, a crisp, berry forward saison, and the smoky Rio de Leche stout, while the kitchen slings fresh pizzas. 516 Brooklyn Ave., (210) 257-0022, backunturned.com.