Broadway 5050 is Back, with Drink Specials to Prove It 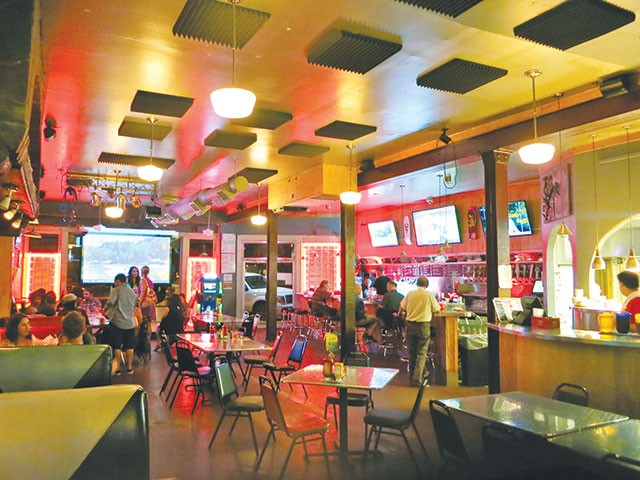 Since 1947, Broadway 5050 has been an Alamo Heights staple. An unfortunate grease fire shut down the neighborhood bar and restaurant last summer for about a year, during which time ownership changed and the interior received a much-needed facelift. B’way 5050 reopened (smoke-free!) on Saint Patrick’s Day of this year with the husband/wife team of PJ and Nicole Gottsacker, indigenous Alamo Heightsers, at the helm.

Every day of the week, from 11 a.m. to 2 a.m., 5050 has your boozy needs covered in some way. Sundays see specials on greyhounds, bloody marys and dollar mimosas. “Service industry night” lands on Monday, beginning at 8 p.m. with $3 Miller and $4 Blue Moon. Tuesdays at 8 p.m. still mark the start of pint night, and though the glory days of $1 beer with your B-Fiddy Fiddy glass are long gone (I really dated myself by bringing mine), wells are $2 and beer ranges from $2 to $4 plus tax per pint, with basic domestics on the low end and fancier imports on the high.

Surprisingly, the crowd was meager on my Tuesday night visit. Karaoke began at 9 p.m., and while I’m usually quick to entertain with my questionable but enthusiastic rendition of “Santeria” (rest in peace, Bradley Nowell; heroin is bad news, everyone) the idea of singing to a crowd of six strangers felt a bit too … intimate for me.

To get you through the rest of the week, Hump Day specials include $5 Karbach and a dollar off all whiskeys, while Thursday ushers in deals on Tito’s, Alamo, Shiner and Rebecca Creek. Finally, Fridays don’t mess around: $3 margs and Dos Equis and $5 Patron. Go ahead–you’ve earned it.

My second visit, this time on a Saturday night, found a bigger crowd as well as some beer and cider specials ($2 Bud Light draft and bottle, $3 Strongbow and $3.50 Leinenkugel’s Summer Shandy). The more, shall we say, mature patrons gravitated toward the bar while younger 09ers held court in booths and at tables, noshing on wings, burgers and sandwiches. One older couple played pool, the owner’s TouchTunes digital jukebox playlist shuffled through various excellent hits of ’90s, ’00s and today (including “Santeria,” which felt like a good omen, and Trey Songz’s “Bottom’s Up,” which oozed late-college nostalgia) and several of the joint’s 11 TVs showed a particularly bloody cage fight.

Beyond the pool table, 5050 has a few arcade-style games and, best of all, free shuffleboard. (I won two out of two times, if anyone was curious.) Small tables and booths aplenty accommodate couples and smaller parties, while bigger groups can easily find seating at a long table in the bar’s main room or toward the back where a grande-sized booth faces the billiards and shuffleboard area. One important note about the interior décor: On a shelf in the corner, there’s a bust of Tim Duncan, serenely taking in the scene, guarded by a small, unapologetic garden gnome flipping the bird to bar-goers. Peep that shit for sure.

The kitchen stays open ‘til 10 p.m. and serves straightforward bar food often named for Quentin Tarantino’s films Reservoir Dogs and Pulp Fiction, including fried pickles with chipotle ranch ($5.49; thin, crispy and tasty), deviled eggs ($4.99; respectable, if nothing to write home about) and chips and queso ($4.99). Heartier fare, such as the El Jefe burger ($9.99) with pico and blue cheese, or the legendary 0911 burger featuring ghost pepper cheese, bacon, jalapeños and chipotle mayo topped off with a fried egg (highly recommended by my bartender), is available to satiate the dinner crowd.

While weekday attendance has been a bit hit or miss thus far, the generous drink specials, solid pub eats, friendly bartenders and rotating entertainment (trivia and increasingly frequent live music, in addition to karaoke; check their Facebook for specific event info) would indicate that the new and improved Broadway 5050 is on track to re-emerge as the boisterous, packed venue it once was.