Brusketa Ristorante misses both heritages, but succeeds on its own 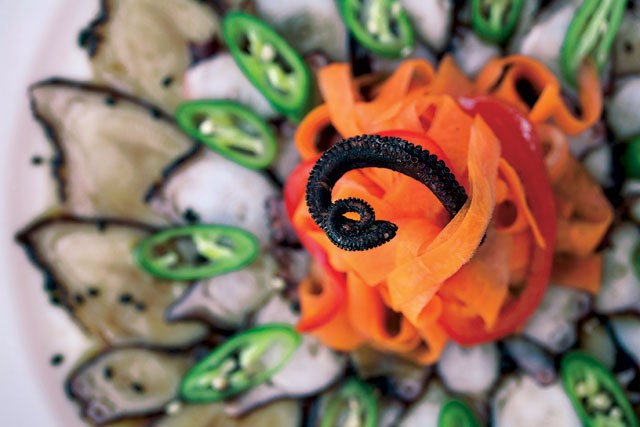 Consider this: people in other countries generally don't try (or care) to execute American cuisine; the French, with the exception of a few chefs trained at the CIA, are left to their pots-au-feu; and Asians are mostly presumed to be the only ones capable of doing, say, pad Thai. But Italian? Everybody feels free to play fast and loose with it.

We have our local examples, and contemplation of the phenomenon triggered memories of La Buca, a short-lived (but very good) Italian restaurant, run by Mexican nationals, in the space now occupied by Ruth's Chris at The Concord. Then there was the more recent Barbaresco, also by Mexicans, whose closing wasn't quite so lamented. And now we have Brusketa — and more Mexicans interpreting Italian. Is there synergy? Or is all lost in translation?

Brusketa occupies the space once held by Grand Agave nightclub's restaurant of the same name, and as the nightclub is still in operation diners should know that there is no acoustic separation; as the evening wears on, the sound level ratchets up. We began, still at low volume, with an order of octopus sashimi, "fresh raw octopus served with Ponzu sauce and Serrano slices." Yes and no. I find it hard to believe that the octopus was altogether raw; both its taste and texture suggested a light smoking. The ponzu sauce may have been mixed with soy — in any case it wasn't as citrusy as expected — but there were indeed lots of fiery serrano slices. And despite the anomalies, the dish was worth ordering again, and pretty good with an herb-tinged Mulderbosch rosé from South Africa. A crisp Tieffenbrunner pinot grigio from Northern Italy struggled some but survived in the end.

We loved the risotto funghi, expertly served by our accommodating waiter, Jorge. Not easy to accomplish at restaurant scale, this preparation was at once creamy and still possessed of that tiny, al dente heart in the center of each grain of rice. But about that odd dusting of dried, powdered parsley … real Italians wouldn't do that. Would they?

We had been looking forward to testing a Mex-Ital mix with the pan-seared red snapper over poblano fettuccini, but, alas, the kitchen was sans snapper. It was also out of tuna prepared in the wood-fired oven behind the bar. That left only a farm-raised Atlantic salmon. Nope. I don't do farmed Atlantic. Plan B then emerged: a 16-ounce Angus strip and penne diavola with pancetta, mushrooms, anchovies, "spicy seasoning" and feta.

Italians, especially in Tuscany, do a great job with their Chianina beef: they simply grill it and serve the slabs with maybe a squeeze of lemon. Brusketa didn't promise bistecca alla Fiorentina — and they didn't achieve it. The Angus strip was tender enough, but despite repeated assertions that we wanted it between rare and medium rare, it emerged overcooked. And the steak's taste was trumped by the excellent rosemary potatoes and the far-from-knee-jerk mixed vegetables. More of those, please.

More of almost everything was needed with the pasta: no feta was apparent; the spicy seasoning one might think Mexicans amenable to was equally undetectable. Ok, there might have been a hint of anchovy. And the mushrooms and roasted tomatoes were fine. Oddly, in fact, the end result was almost OK — just not as advertised. A Washington merlot and an Italian red from the Abruzzo served both dishes well.

Deciding we needed to put the display oven in service, from the dessert list we selected the banana, pecans, and dulce de leche pizza. Italian? Not really. Mexican? Also not. But in the end very good — which is maybe all that really matters.