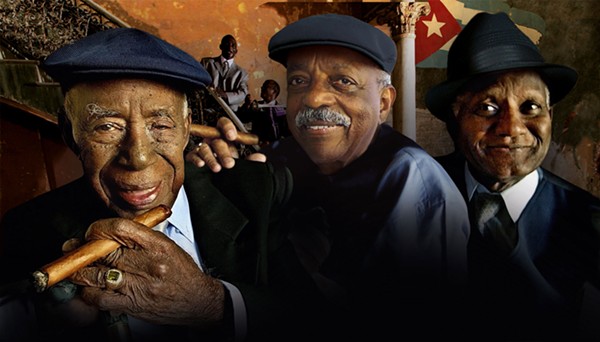 The release of the Buena Vista Social Club's eponymous album in 1997 was something of a musical equivalent to uncovering the Dead Sea Scrolls. The Cuban sound had been ubiquitous in American culture through the 1940s and '50s, be it through Dizzy Gillespie's famed Afro-Cuban Orchestra or Desi Arnaz's portrayal as bandleader Ricky Ricardo on I Love Lucy, then with the embargo in 1960 ... nothing. The signal went silent.

It was easy to imagine, at least from an American perspective, that all the musical, artistic and cultural energy emanating from Cuba just stopped cold with the rise of Fidel Castro and communism, which made the Buena Vista Social Club all the more special: here was a vanished form, assumed lost for good, suddenly rebroadcasting, and sounding more vibrant than ever. That the voices behind that record — bandleader Compay Segundo, singer Ibrahim Ferrer, pianist Rubén Gonzélez — were the same musicians that had captured American audiences before the embargo, made the LPs impact that much more substantial.

"We perform timeless songs, that are a fusion of genres and styles," says Barbarito Torres, laúd player and one of Buena Vista's founding members. "We sing in Spanish, we have some French influences with danzon and above all we perform with our heart. We love what we do and I think this the audience can feel."

Nearly two decades have passed since Buena Vista emerged from Havana, and those audiences have kept feeling their sound in sold out shows the world over. But the band has changed plenty during that time: founders Segundo, Ferrer and Gonzélez passed away at 95, 78 and 84, respectively (gotta respect that Cuban healthcare system). To maintain the vitality of the band, Buena Vista has invited a cast of modern Cuban musicians into the fold to further push the sound.

"They are very talented artists and we are happy to have them in the group," Torres says of the Orquesta's newest members, who include pianist Rolando Luna and singers Carlos Calunga and Idania Valdes. "We are a big family. Look, even (trumpeter Manuel "Guajiro" Mirabal's) grandson plays with us!"

Family does seem an apt way to describe the warmth Buena Vista emits from the stage. Captivating as their debut album was, it's in the live atmosphere where the rhythmic and emotional energy of their sound is most apparent (an energy nicely showcased on the 1998 Live in Madison Square Garden.) Despite the band's many senior members, they've never failed to come alive in concert, a tradition that's continued from their historic first appearances in Havana up through their upcoming show this Saturday at Laurie Auditorium.

The expanded lineup — now fleshed out to a 13-piece — have added an extra dynamic with their eclectic musical backgrounds: singer Omara Portuondo recently lent her vocal talents to reggaeton artist El Micha's latest album, while Amadito Valdés has lent his percussion talents to numerous salsa and charanga recordings.

It's been an exciting development for the band in recent years as they've worked to incorporate the more modern Cubano styles of the new players into the traditional Buena Vista sound.

"Influences (have) been a great part of music evolution," says Torres. "Influences means movement, new sounds and learning, and this is all good for the music. All kind of music is important because it's a representation of our culture and music is a way of communication, many things indeed."

Like the band, the world has also changed plenty since 1997. The past year has seen an unprecedented thaw in US/Cuban relations. Though the two nation's diplomacy is still far from normalized, it seems a matter of time before the cultural pipeline between both countries starts flowing again, for better or worse.

In many ways it makes sense for the Buena Vista Social Club to be ending their historic run with this current tour. There's always a cultural mission, a needed bridge between two estranged, closely related nations. In the wake of their trailblazing influence, perhaps a new Cuban sound will captivate the world again. As for what the band has lined up beyond their farewell tour, Torres claims they plan to enjoy their adios to the world for as long as it lasts.

"We have a long tour for this year and some dates in 2016. Then some of us will work our own solo projects. Music is our life, soul and we will keep playing."