Building a collage of apertifs with Olaf at the Blue Box 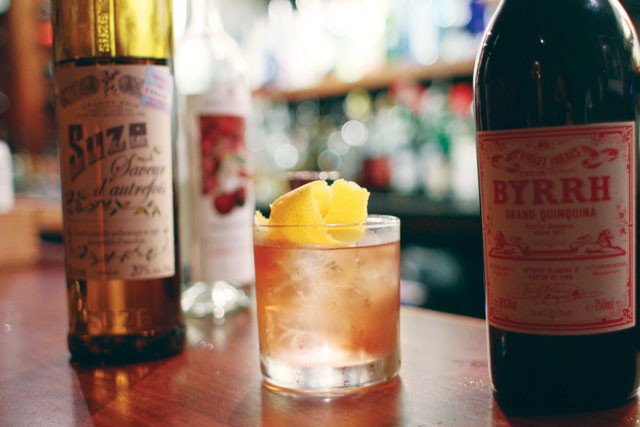 The more one delves into drinks, the more one — this one, anyway — realizes that there's always more to learn. Take apéritifs, for example.

Americans in general tend to pay little attention to the traditional roles assigned to certain liquors and liqueurs. A digestif, for example, suggests in its name its purpose in life: to settle the stomach and promote digestion after a meal. More on these another time. The role of an apéritif, on the other hand, is just the opposite — to open up the appetite before a meal. Those with an adventurous palate (and deep pockets) can simply go to a well-stocked liquor store and round up some bottles with the aid of a knowledgeable salesperson.

A good bartender may also ask you if you've already eaten or are just about to — at least that's what Olaf Harmel at Blue Box often does. If you happen to catch him in an experimental mood — usually right around six when he opens his loft, and early in the week — you might take advantage of an evolving round of drinks involving, say, Suze or Salers. Say what?

Maybe because of the Picasso collage Glass and Bottle of Suze, I at least knew that name, but more than that, nothing. It turns out that both Salers and Suze are apéritifs (yes, it was before dinner) made from the root of slow-growing gentian plants harvested on the slopes of France's volcanic Massif Central. They are characteristically bitter with a hint of citrus and a touch of anise. In their simplest form, a perfectly delightful, bittersweet drink is this: pour two or three ounces over ice, squeeze in a wedge of lemon, and stir.

Harmel, of course, doesn't stop there. On this night, he was playing with Negroni Novi (my term, not his, for new-style Negronis) substituting gentian bitters for the traditional Campari. I preferred the Salers to the Suze. Then, striving for a truly white version, he turned out a drink with Plymouth gin, dry vermouth (Dolin, I think — or maybe Noilly Pratt), and Salers. "Nicely dry and crisp, more herbal and less bitter than with Campari," say my notes. Note to self: try with half-Dolin, half-Cocchi Americano for just a touch more sweetness.

A green negroni with chartreuse in lieu of Campari was a little heavily herbal for me, but a slab of lemon helped. From here, a drink melding one part gin with half-parts dry vermouth, Salers or Suze, kirsch, and chartreuse emerged. Now we were getting somewhere.

I'll spare you the move to Byrrh Grand Quinquina, another French product made, in this case, from South American quinquina bark with coffee, bitter orange, and more. It's also good straight with ice and lemon, but I might as well admit that the mix of Citadel gin with kirschwasser, Byrrh, and Suze might be asked of Harmel when next you're lofting it. My notes say "Yes!!" using up two of my (limited) lifetime allotment of exclamation marks — though almost anything might have rated raves at this point. And now I was really hungry.