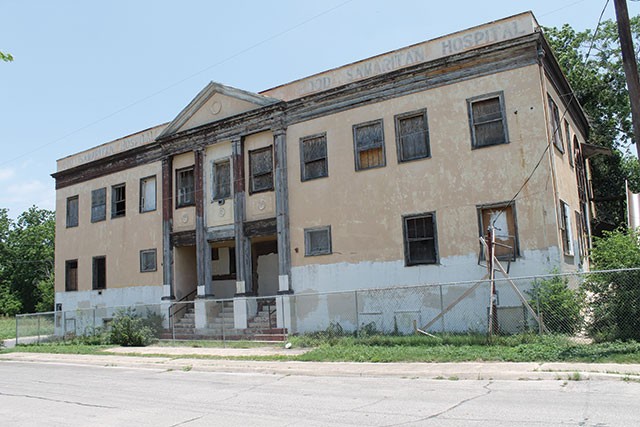 Opened in 1931 as the Corinth Baptist Church, this former hospital built by contractor W.C. White is located at the corner of Dakota and Connelly Streets on the East Side. The one-story church served a large portion of San Antonio’s black community.

In 1948, the church was converted to a hospital. During this period, San Antonio was still segregated and blacks were not allowed to work in white hospitals. Good Samaritan Hospital was founded by Rachel Starr, a registered nurse who had 27 years of experience in the medial field, and Genevieve Troutman, a hospital technician. These two women were determined to open a hospital to serve the black community. In their efforts, they reached out to almost every area church with African-American congregations. Rev. J. Henry Hardeman of Corinth Baptist Church, which had a congregation of 1,400 at the time, offered Starr and Troutman the opportunity to open a hospital in his church. The church board approved the concept and donated the church’s building fund of $33,000 to hire W. C. White to renovate the building and add a second floor. Shortly afterward, Corinth Baptist Church moved to its present location at 500 S. New Braunfels. The hospital operated for almost 10 years. After segregation ended in San Antonio, the building was used for a few years as a women’s dormitory for nearby St. Phillip’s College.

In 1991, Melody R. Jones operated a nonprofit agency in the building. The program, known as Reaching the Youth of America, served troubled teenagers from the East Side. Jones started the program in 1987 and during her time as director of the agency, she earned several awards, including the J.C.

Penney Golden Rule Award and the United Way Volunteer of the Year. However, Jones had trouble soliciting donations and soon faced eviction. In August 1992, several people were living in the building’s temporary shelter. When Jones was served with the eviction notice, the residents were suddenly faced with a hardship and Jones was able to plead her case in front of Justice of the Peace Clarence Williams. Williams gave Jones 45 days to work out an agreement with landlord Elizabeth Holeyfield about the $8,000 owed in back rent. Due to publicity about the eviction, donations for RYSA came pouring in. Jones was able to continue her work and move her organization out of the by-then derelict building and into another location.

In 2012, the Veterans Outreach and Transition Center at St. Phillip’s College partnered with the City of San Antonio to renovate the building and use it to provide services for local veterans. Though the project has been worked out in detail, it has been delayed due to funding. The City of San Antonio has provided $2 million for renovation. Unfortunately, the cost for rehabilitation of the building and the surrounding area runs higher than the amount provided by the City.