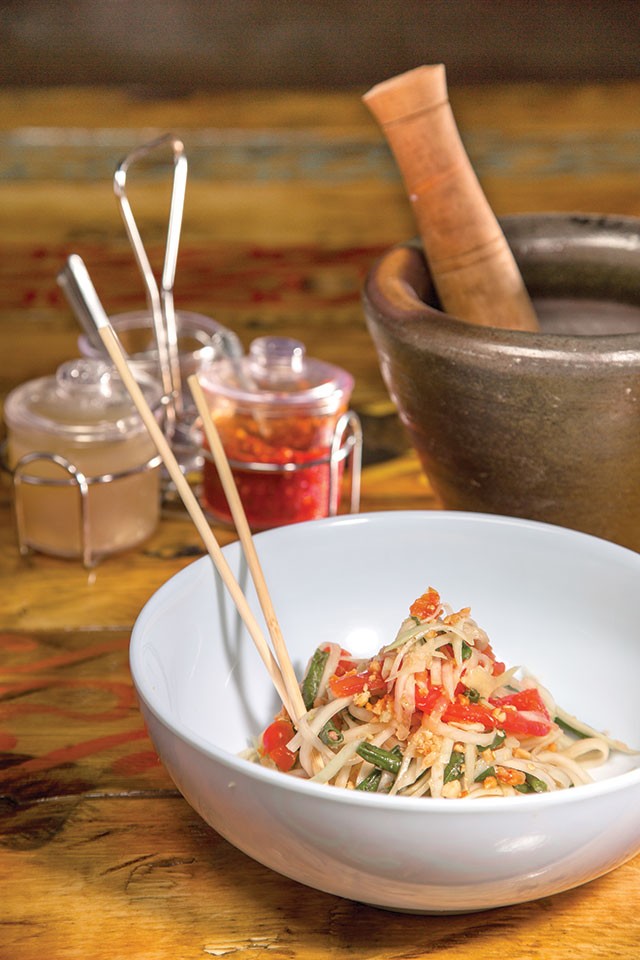 As the first in a string of eateries slated to open on the Government Hill side of Broadway, Tuk Tuk Tap Room promised the city a serendipitous pairing of serious craft beer and Asian street fare as prepared by a James Beard Award-nominated chef. While the making of the restaurant took a bit longer than expected—the original June opening was pushed back to mid-September—the buzz around Tuk Tuk continued to build. Let’s chalk that one up to the media (our bad) and the constant traffic along one of the city’s main thoroughfares. Even so, the new spot wasn’t quite as busy as one would expect during a recent Friday visit.

This could very well be due to the parking situation that’s just different enough to confuse would-be diners—us San Antonians are still used to giant surface lots in front of every establisment. Does one dare park across the way in the underpass lot and attempt a Frogger-style scurry across busy Broadway or should one try to snag scant parking along the street in front of the 1800 apartment complex? A little known secret is the plentiful parking behind Tuk Tuk off North Alamo, but the 5-minute jaunt around the block might deter some customers. As restaurants continue popping up in the vicinity (look for SoBro Pizza Co. on the ground floor of the Mosaic apartments next), it’d be in the City’s best interest to solve these auto woes. Or we could all start biking everywhere, I suppose.

That location was a gamble owners Jody and Steve Newman (Friendly Spot, Alamo Street Eat Bar), along with chef David Gilbert (formerly with Sustenio at Eilan), decided to take when pioneering this venture. As the first of its kind—and I’m sure there will be many a duplicate in the coming years—Tuk Tuk’s banking on urban patrons in a city with a still young (pun intended) urban core. Its hip, distinct Robert Tatum-designed interiors and recycled carpentry via Jason Pascall drives home the youthful vibe.

The sizeable spicy fish cakes, packed with red curry and long beans with a hint of lime, paired nicely with the tart and sweet pickled cucumber salad that still retained a crunch—on their own, the fish cakes were overwhelmed by salt.

Local pho fanatics might want to skip the Saigon-style offering. The bowl, dressed with fresh cilantro (I imagine the gastropub goes through several cases of the herb per week), bean sprouts, thinly sliced onions and fresh noodles felt flat for all the effort. While tender brisket perked up the bowl, the broth left this diner underwhelmed.

But nevermind the missteps, Tuk Tuk excels when it comes down to its specials. This is where Gilbert gets a chance to really stretch his legs and showcase his love of Asia with an ever-changing selection. Recent hits included fried prawns ($15.50) with a tamarind and palm sugar coating. Flash fried and only partially shelled (yes, you’re supposed to eat those), the result was sweet and crisp without devolving to saccharine. Shenzen lamb dumplings ($9.50), handmade by Gilbert, in a ginger, scallion and mushroom broth were fragrant and comforting. The Ped KRXB crispy duck ($26.50 with rice and pickled mango salad) laced with anise, cinnamon, tamarind and chili sauce—which Gilbert should bottle—was moist. Toss aside any conventions that eating half a duck will be ladylike. It won’t.

I probably could have used a tuk tuk, or rickshaw, after consuming a quarter duck and then some, but turns out I could also benefit from the walk back to my car on North Alamo. I was never really keen on Frogger.