As a natural enemy of SXSW's swarms of PR people and false promises of exclusivity, I'm down to shell out $25 to see 35 of the festival's best garage and punk bands on their ride back to California, however hung over they may be.

Thrown by Fuzzland Productions and Do210, Burger Hangover Fest IV welcomes the acolytes of Fullerton, California's most prolific garage label. Since 2007, Burger has released over 700 cassettes of blown-out, fuzzed-out and fucked up rock 'n' roll.

On Sunday, the Burger caravan — imagine a busted fleet of tour vans, farting out exhaust and bong clouds — rolls into town, ready to shred on a city that loves itself some rock 'n' roll. Behold, our guide to the two-stage mini-fest; let it shine through to all the heads encumbered by the weekend's haze of booze and festival food.

Tracy Bryant • As the frontman of the stygian punk outfit Corners, Tracy Bryant is a dark and handsome figure, one to keep away from your significant other. But recording under his own name, his comfortable-in-cardigan garage is something to bring home to your parents — if they run errands to the tune of "Sweet Jane." Bryant's first self-titled effort in 2014 was a quietly perfect home recording, but the LA musician upped the ante for this year's Subterranean, delivering dark guitar pop with attitude and élan.

No Parents • Jay Reatard's shadow looms heavy over the world of garage rock. After the 29-year-old Memphis scorcher died in 2009, many have tried to replicate his brand of garage punk, though few have come close to his talent for condensed hooks and Teenage Hate. Among the closest are LA brats No Parents, whose tunes like "Dick City" and "Die Hippy" revel in fast-paced stupidity. For a pure, unsupervised punk set, No Parents are a must-see.

Guantanamo Baywatch • As a rule, a pun for a band name sucks. As an exception to the rule, Guantanamo Baywatch is a sweet pun and pen name, bringing to mind a Hasselhoff figure jumping the razor-wire fences of America's national disgrace to rescue an orange-clad Dick Dale from a waterboarding session. This Portland trio plays within the traditional rules of surf rock, remaining true to the backbeat and cowabunga guitar lines. They're cool in the way that tiki drinks are currently cool: slightly corny and totally delicious.

Night Beats • Every other band with a fuzz pedal slaps the psych tag on their guitar cases and Bandcamp pages, but this Seattle trio lives for the stuff, as it was first divined by Texas legends The 13th Floor Elevators. A beacon of shredding on The Black Angels' Reverberation Appreciation Society, Night Beats' heady set is the most likely occasion for a Paper Tiger hotbox. 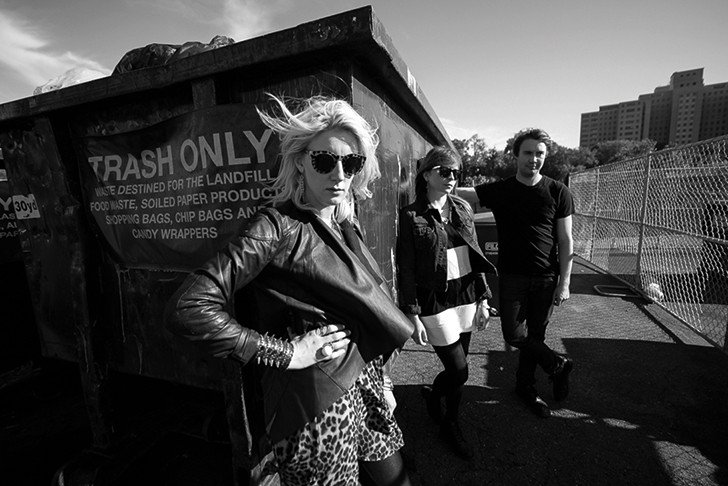 White Lung • Despite annual growth that would excite the most anxious of businessmen, Burger cares about its artists. The label never 'signs' bands, letting musicians keep the rights to their work. For parties like Hangover, Oakland's Burger Boogaloo and LA's Burgerama, the label welcomes all sorts of bands who have never had a cartoon sandwich on their cassette spine. White Lung, a Vancouver quartet signed to Domino, is the mini-fest's most prominent party crasher. On 2014's Deep Fantasy, the eminent Mish Way leads the band through blistering guitar lines and diatribes against a very unfortunate subject.

Shannon and the Clams • This occult-lite, pan-rock band has more attitude in guitarist Cody Blanchard's pencil moustache than most bands have in their entire discography. Selling out the Paper Tiger's small room in October, the Oakland trio returns for a Sunday school lesson in doo-wop punk.

The Spits • Sloppy in form and tight in execution, The Spits carry the torch of the late Johnny, Joey, Dee Dee and Tommy — sniffing glue, doing weird stuff in the basement and blasting through crunching, lick-less punk. Year after year, the Seattle quartet is a best bet on the festival bill, guaranteeing to rip harder than the pretty young things on the docket. If you and your date can sing along to "All I Want," marry each other on the spot.