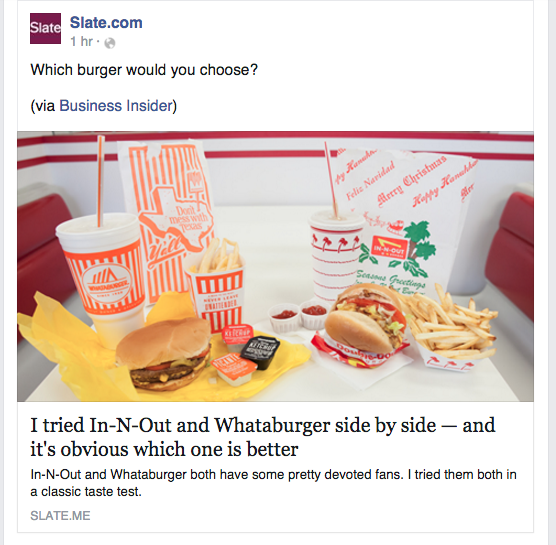 Yes, there are two types of people in the world — those who love Texas' own Whataburger and those who I guess are ride or die for In-N-Out. As a Texan gal who enjoys the occasional No. 5, no onions, add jalapeños, I'm obviously biased to the WB. That damn orange glow looks real good at around 2:30 a.m., what can I say?

Given my penchant for the Texas chain, when I stumbled along this link shared by Slate on Facebook, I emphatically, and almost audibly, rolled my eyes like so:

For starters, the piece, which is really more of a photo essay was produced by Business Insider's photo editor. I'm not knocking Sarah Jacobs' work, by any means, the images are great and the rest of her portfolio is honestly rad. But a bit more of the scientific method could have been employed during her little experiment.

Maybe the writer/photographer could have disclosed whether she's been to either chain previously. Other things to note: Was she joined by other eaters, or is her palate the lone deciding vote, if so what makes this any different than a silly Yelp review? Perhaps the most aggravating part of this fumbled experiment was choosing to take the Whataburger sack to In-N-Out. Why not take the In-N-Out bag to Whataburger instead? In other words, how long did the WB lay untouched while Jacobs ordered and waited for it to arrive? Time, as with most fast food, is of the essence.

Did she even open the spicy ketchup packet? Or bother getting a regular No. 1 and customizing it to her own liking as Whataburger encourages — nay — begs its customers to order a burger "just like you like it"?

People can like what they like — I for one will never stop loving or spending way too much money on movie theater popcorn — but maybe spend another $10 bucks to get it right next time? No, it's not obvious which is better, it's totally arbitrary and subjective, mija.

It's almost as bad as when Buzzfeed's Ashly tried Whataburger for the first time ...