Butt-hurt at Club Rio with Migos 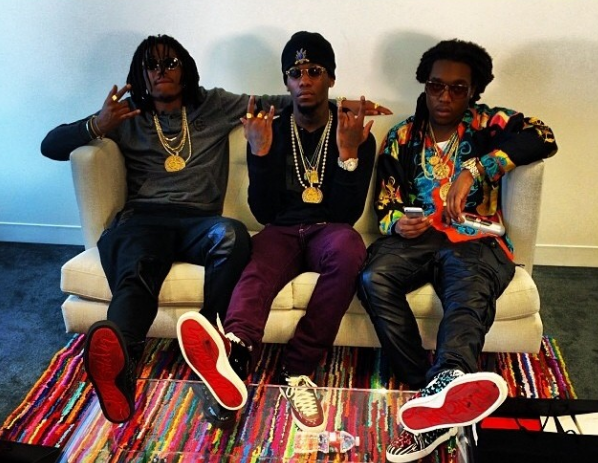 When asked to write a 350-word review on the Migos, "Return to the Bando Tour" stop in San Antonio it was very difficult not to just write the words "Hannah Montana" 175 times. But, that would be unfair as the Southern trap-rap group is nothing short of impressive with their DIY ethics and impeccable timing of releases. They ought to be given the attention any self-made artist deserves.

Migos members Quavo, Take Off and Offset recorded their first hits in the closet of their Atlanta home, promoting these tracks by buying local DJs drinks to play them out. It didn't take long for their talent to render recognition. Before having ever even released a full-length album the group's astounding amount of material had them signed twice to independent labels, striking gold with Youtube, and taking spots on top charts with singles off the Y.R.N. mixtape, produced by Soulja Boy, featuring Gucci Mane and Riff Raff and spawning an official remix by Drake for the viral hit, "Versace".

San Antonio's date on this tour brings us to the North Side's Club Rio. If you haven't been to Club Rio, it's filled with P.Y.T.s nightly and is the type of club you go to to feel bad about how your butt looks, compared to venues where it might not matter that your butt looks like a lunch sack full of twenty-sided dice. That being said, it was difficult to predict what crowd the group might draw here as they no doubt have a broad cult following. (Due, in part, to their enigmatic YouTube sensationalism and their ability to combine hypnotic hooks with poignant quips set to the cadence of hyped up dirty nursery rhymes). In other cities one might expect to see art school hipsters ironically getting down, but the crowd we witnessed was anything but ironic. They were young, energetic and boldly dressed. We definitely looked like the official poseurs of the night.

As the opening DJs played through their sets the dance floor was being dominated by scantily clad babes who rejected any man they deemed unworthy of dancing with them. Deflecting their lame passes with a stiff arm motion while still twerking to the beat of remixed radio hits, like trap goddess versions of the Heisman trophy. As empowering as this was to watch it seemed Migos were taking their sweet time making it to the stage. The heavier the crowd seemed to get the thinner my patience became for the "warm up" acts.

Still when they finally showed up, just before last call, and despite being a two piece at the moment (Offset is currently incarcerated in Bulloch County, Georgia) they performed with such presence and delivered so many primary hits that you couldn't help but croon along and bounce. A memorable lyric was "Please don't try to run game on me/ I'm not a Playstation," and quips like,"I don't know how you feel/ can you tell me". Our only complaint would have been that the fog machines began to be a bit of overkill due to the impressive amount of blunts being passed around on stage.