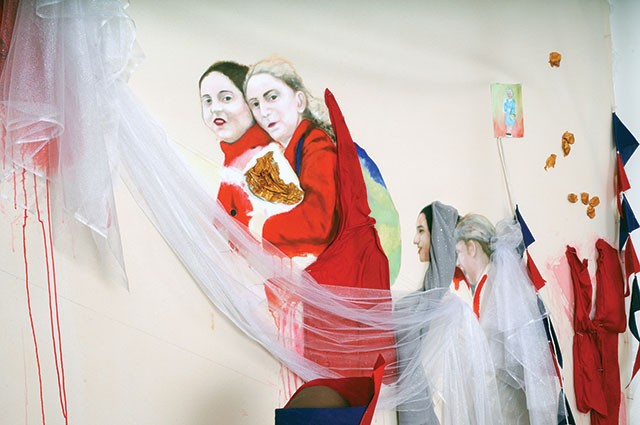 Contemporary Art Month is indeed upon us, kiddos, made all the more interesting for Blue Star’s role in its inception, back in 1986, and its traditional hosting of the opening party. What with the challenges Blue Star is undergoing and the grassroots origins of CAM, this year’s inaugural bash has all the makings for a fascinating evening with a lot to celebrate. Here are some Blue Star CAM events not to be missed.

The annual kickoff and cluster of simultaneous openings is on March 6; the celebration begins with a ribbon-cutting at 6 p.m., followed by music, complimentary beverages, mouth-watering food for sale from San Antonio’s finest food trucks (Heathcott confirms the Institute of Chili) and the crowning of Miss CAM Antonio.

One of the openings is “Euroscapes” by San Antonio’s own Mira Hnatyshyn-Hudson, a University of Texas—San Antonio grad whose work has been collected by Saatchi, London. It’s a painting installation based on a series of photographs she made of women, including an image from the U.K. of schoolgirls ascending the Tower of London, and images from Ukraine of women and girls in a market, which she embarked upon just as the current unrest began to explode. This should exemplify her continued fascination with historical ideology particularly as it pertains to female narrative.

“Organismo,” a material representation of the U.S.-Mexico border by Brazil-born, Colorado-based artist Rosane Volchan O’Conor, invites viewers to step into a large-scale environment of rock-like pedestals, neon light, acrylic rods, folded paper and mylar, all representing structures from the microscopic and cellular to the overarching and political. There’s a bewitching video of one of her installations being, well, installed on her website (rosanevolchanoconor.com); I’m eager to check out her intricate multiverse.

Paul Rodriguez, a young LA-based video and multimedia artist and another Saatchi favorite, mounts “Post-Penis,” which, if his previous work is any guide, might be a disquieting and dreamy exegesis of sex and gender binaries. Check out his Vimeo offerings at vimeo.com/pablomrodriguez.

Finally, New York-based Claire Watson displays “Now What,” a set of intimate collages based on, and sourced from, delicate personal belongings (notably, gloves) to assemble a set of avatar-like figures of a wry, animist iconography and the dream world of ancestry.

That’s a lot of bang for your buck (though it’s free); let’s do this thing, San Antonio.