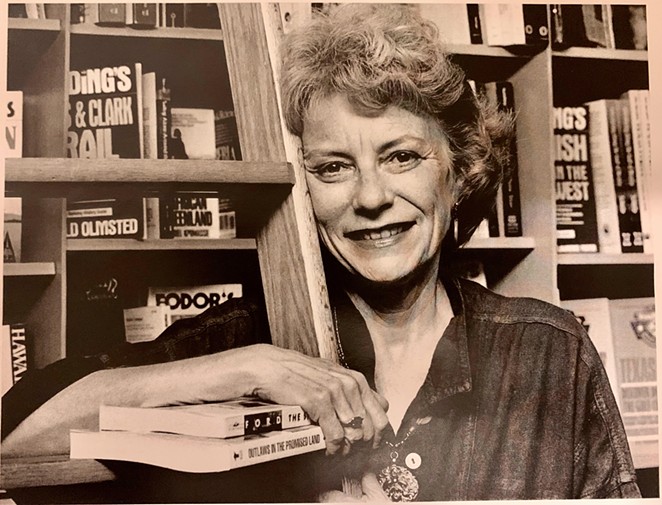 Camille Duane Rosengren, the final owner of storied Rosengren's Bookstore, died peacefully at her River Road neighborhood home on Saturday, September 11, two weeks shy of her 95th birthday. Her daughter Emily Katherine Ferry was by her side.

Cam, as she was known by virtually all, resided for most of her childhood in both the Menger and the St. Anthony hotels in downtown San Antonio. She often told stories of meeting celebrities in the lobby and rummaging around the attic of the Menger — although she vowed to having never seen a ghost there. She attended the Bonn-Avon School in King William and received her master’s degree from Our Lady of the Lake and her PhD from the University of the Incarnate Word.

In 1951, she married Frank Duane Rosengren, son of Florence and Frank Rosengren, proprietors of the celebrated bookstore Rosengren's. With Frank — an author, poet and playwright — she moved to New York City and became a researcher at the Metropolitan Museum of Art. Their daughter Emily was born, and the family stayed in New York for more than a decade before returning to San Antonio. Cam Rosengren became a librarian at San Antonio College before the opening of Hemisfair '68 and then went to work as a researcher for the newly established Institute of Texan Cultures.

In 1979, Rosengren took over managing the family business from her mother-in-law and, through her guidance, the store flourished as South Texas's preeminent independent bookseller. Authors, celebrities, politicians, artists and local residents flocked to Rosengren's, behind the Alamo and then on the Riverwalk, for reading material and intellectual inspiration. The store, which closed in 1987, was a cultural landmark with a national reputation. Author and Harper's magazine editor Willie Morris called Rosengren’s "one of the finest and most admirable bookstores in America."

Rosengren was a former vice president of the San Antonio Conservation Society and a member of Women for Peace in the Southwest. She was also one of the founders of the River Road Neighborhood Association as well as a longtime member of the Zonta Club of San Antonio, a professional women’s service organization.

A bright, worldly and well-versed individual, Rosengren was direct, curious and not unfamiliar with the occasional use of colorful language. She suffered fools with all the patience of a guillotine operator. And yet, if you were up to speed with her quick, razor-sharp mind, the world instantly became a much livelier, more engaging place.

She was nearly always the best-read person at any gathering, able to discuss the latest movies, books, classical music, political events in Myanmar and favorite restaurants in New York — she either knew or could rustle up an answer, even without an iPhone nearby. Conversations around her kitchen table were legendary. If San Antonio ever had a nascent literary salon it burgeoned in the Rosengren family's historic 1780 “Zambrano Homestead.”

Rosengren is preceded in death by her husband in 2010 and survived by her daughter, Emily Ferry of Los Angeles, and her godchildren, Ben Hernandez and Dolores Hernandez Kuttruff.

In lieu of flowers, the family has suggested making a donation to the Wildlife Conservation Society.