In a premature obit for Tim Duncan's Spurs, who stand a loss away from elimination in their playoff series against the upstart Memphis Grizzlies, Basketbawful writes the following:

You know what else is wrong with the Spurs? Tim Duncan ... [He’s] had quite a few un-Duncan-like performances this season. Out of the 76 games he played, Duncan scored in single figures 21 times. By comparison, that happened only seven times in 78 games the previous season and only four times in 75 games the season before that...Almost 10 years ago, I had this experience with Malone and the Jazz. It hurt and, in many ways, I was never quite the same. My heroes were exposed as mere mortals and my own mortality was revealed in that truth. Last night, Zach Randolph and the Grizzlies dealt another blow to how I perceive the world and my own mortality. It doesn't feel good. But it feels like the truth. And we all have to face it some day. Even basketball legends like Tim Duncan. Thanks for the memories, San Antonio Spurs. Thanks for everything.

It's a virtuosic and defensible essay on the state of the Spurs, but at its core, it's an obvious analysis. And one that misses the true culprit in the Spurs' late season swoon and deep playoff hole. The identity of the responsible party is every bit as surprising as San Antonio's current 3-1 deficit to the Grizzlies, and every bit the surefire hall-of-famer that Duncan is. His name: Gregg Popovich. Popovich has long been known for tinkering with his starting lineup throughout the first half before settling on an ironclad rotation after the all-star break. This formula has resulted in multiple championships. But this year he flipped that formula on its head. With DeJuan Blair as the team's starting power forward, San Antonio raced out to a 51-12 record. Only when injuries occurred did Pop plug the likes of George Hill into his starting five. But the gritty, energetic Blair was a constant, and a perfect (if undersized) board-crashing yang to Duncan's aging yin. The diminished Duncan we see now was the diminished Duncan we saw then, but the results were dramatically different. 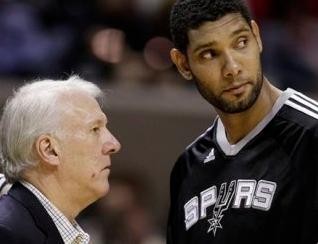 The critical juncture came with what shall go down in Spur lore as the March 6 massacre. On that afternoon, on national television, the Lakers jumped out to a 34-13 first-quarter lead against the Spurs in San Antonio en route to a 99-83 drubbing. The next game, Blair, who had 12 rebounds against the Lakers, was replaced in the starting lineup by Antonio McDyess. Blair has since continued coming off the bench, save for a pair of games McDyess missed due to injury (which the Spurs split). Blair's record as a starter: 52-13. McDyess': 8-8, not counting 1-3 in this postseason. The nadir of Pop's strategic flip-flop came Monday night, when Blair logged less than six minutes in a Memphis rout (insult to injury: Tiago Splitter, a benchwarmer for most of the season, proved a far more favorable substitution option than Blair). Blair's initial benching was an overreaction to the Lakers' size, but not every team is the Lakers, and Zach Randolph isn't Pau Gasol (nor is his brother, Marc). Blair's continued benching is the bizarre byproduct of Popovich's stubborness. Fortunately for the Spurs, it's not too late for Pop to see the error of his ways and reinsert Blair in the starting five. Unfortunately for the Spurs, he should have conceded that before the playoffs even started. Mike Seely is the editor in chief of Seattle Weekly. He wishes Seattle had icehouses, but the weather is worse than Chris Quinn.