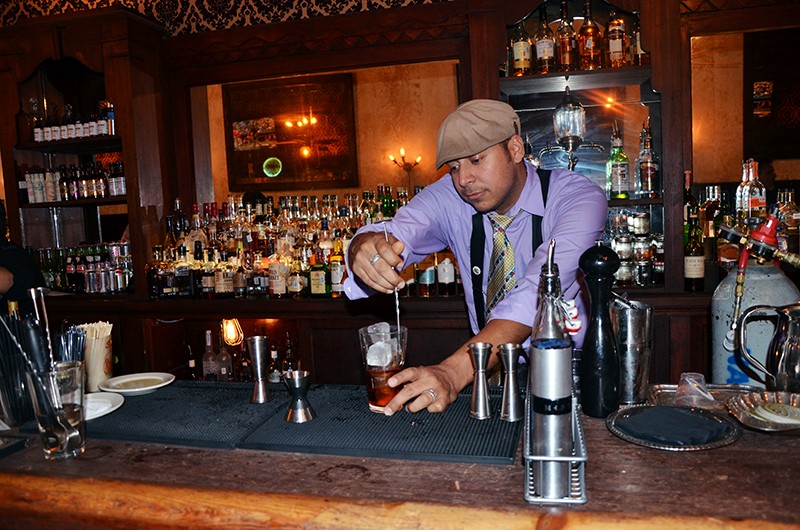 Unlike San Antonio's restaurant scene, attention from the James Beard Foundation has been scant in terms of the city's drinking domain. The sole local semifinalist, Jeret Peña, nabbed that honor in 2012 for his program at the then-newly reopened Esquire Tavern. Since leaving the downtown establishment, Peña has focused efforts on expanding his cocktail footprint by opening The Brooklynite, Stay Golden Social House, The Last Word and the upcoming pub on Main, inside the former Beat Street Coffee Co.

The 33-year-old sat down with the San Antonio Current to talk about how to regain JBF attention and how he's getting back behind the stick.

Current: How have you seen the cocktail landscape change?

Jeret Peña: We went from nothing to something to almost a vertical spike in three years. You're talking about the genesis of it all and there was really a whole lot of forward thinking, progressive food and dining concepts.

Was there a specific catalyst?

I think the turning point was when StarChefs.com came to San Antonio and Austin. I really think that was the turning point for San Antonio. They're almost like the left hand of the James Beard Award. Jason [Dady] and I talked about it when we were both in New York for the International Chefs Congress. He pointed it out. The only reason we got these was because of StarChefs. They put us on the map. Most people who have gotten a StarChefs award, not all, have also been nominated for James Beard. It's a pretty powerful organization. They spend a lot of time dealing with chefs and bartenders, trying drinks and scaling where they are.

How do we keep pushing forward?

Typically, I don't have to push my people. We're all very ambitious with the whole creation side of the cocktail.

How do we replicate that?

Our goal behind the Last Word is to make it a very small intimate bar where we focus on super-esoteric cocktails. Laborious, chef-driven drinks, from presentation to the nuances of flavors in the layers of the drinks.

What role do you think public relations professionals play in drawing attention to the scene?

I do believe publicists are making their way to San Antonio and that's another voice, so other people around the country start to hear about San Antonio. Three, four years ago, getting a publicist or a PR company wasn't even considered in the city because it didn't make sense. But now to have a well-oiled machine, or cocktail concept, it sure as hell helps to have a PR company to reach out to the mass amounts of writers, bloggers that a chef or bartender wouldn't normally have access to. Still, the proof is in the program, if it's progressive and solid and gets a bunch of accolades and you use them to stoke the flames. That helps out.

Now that you're getting back behind the stick, what's your thought process?

It's been hard. Over the last year and a half I've been really focusing on operations and fine-tuning operational stuff. I missed it. It's what I'm good at. I like being behind a bar, entertaining people and equally being creative. My creativity has been pushed to putting deals together and concepts, but I still miss that. I miss making a drink for someone and setting it down on a bev nap and watching them enjoy it. I feel like now that I'm slowly getting back in and watching things from afar and looking at how people make cocktails now compared to two years ago, there has been a shift. I got more inspiration in regards to flavor profiles and I feel like my creative juices are flowing and starting to come back in the drink concepts I've announced.

Who else do you find equally ambitious?

Chris Ware. I've definitely had conversations with him about seeking James Beard out. He's very ambitious and has some really great ideas and concepts. I think he's a fantastic bartender. Karah Carmack is another one that really does. She wants it. People want national recognition for a program they've put together.

Why was that Esquire program so successful?

The best menu I've seen was at The Esquire from fall 2011 to winter 2012. That was the fuckin' best cocktail menu we've ever had; it was just perfect. Everything was good. Every drink was a really great drink. Everything was really thought out and well made, from the Only the Besh cocktail we put on the menu for John Besh to the Only Word, which is basically a mezcal Last Word with celery bitters.

How do you get back?

I need someone to operate my business so I can get back behind the bar. I've hunkered down with ops and business development. People ask about me, and I want to get there. We're really close.