Carey Mulligan Plays The Field In 'Far From The Madding Crowd' 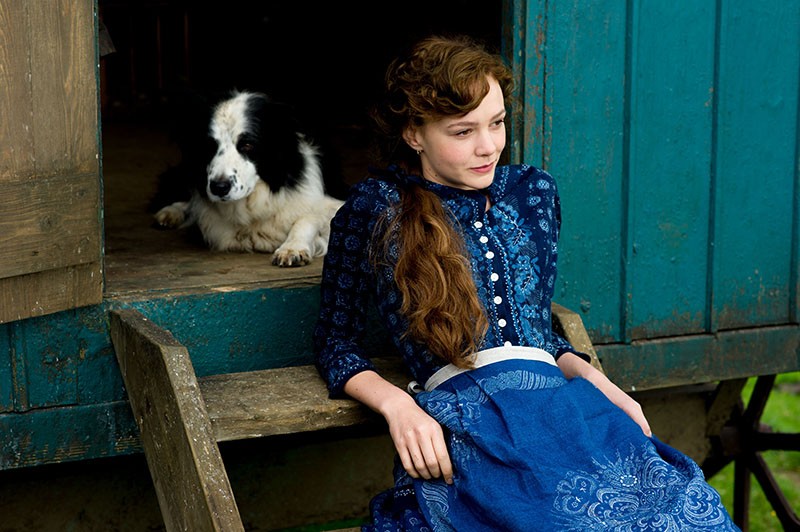 The novel it's based on is a century and a half old and it opens with a mad-sheepdog accident, of all crazy rural old-fashioned things. But this new cinematic adaptation of Thomas Hardy's Far from the Madding Crowd is more modern, more progressive and even just plain more grownup than half the movies thrown at us in our stodgy convention-bound movie landscape.

Yet it's not always modern in positive ways. The challenges faced by its female protagonist as she navigates a man's professional realm and the assholery she encounters as she ponders a woman's romantic options are barely distinguishable from what women are still putting up with today.

I haven't read Hardy's book since high school and I remember so little of it that the plot twists here came as surprises, so it's possible that screenwriter David Nicholls (Great Expectations, One Day) and director Thomas Vinterberg (The Hunt) have fudged some details a little to make their film more relevant to today's audiences. If so, that's okay. It's great, in fact. The bones of the story remain the same and even before this movie appeared, Bathsheba Everdene was smart, brave and independent enough to inspire Suzanne Collins to name her Hunger Games protagonist (played by Jennifer Lawrence) after her.

Here, Bathsheba is a marvelous free spirit with verve, passion and steely courage embodied by Carey Mulligan (Inside Llewyn Davis, The Great Gatsby). She races her horse across the moors of Wessex — Hardy's fictionalization of the rural English county of Dorset — riding in a most unladylike yet most practical manner. She wears a cool leather jacket and intends to "astonish" workers at her uncle's farming estate, which she has just inherited and will manage as if she were a man, even though it is the female-unfriendly Victorian 1870s. She's positively dripping in handsome suitors: Gabriel Oak (Matthias Schoenaerts: A Little Chaos, Suite Française), a shepherd on her farm; William Boldwood (Michael Sheen: Kill the Messenger, Admission), the wealthy landowner next door; and Sergeant Francis Troy (Tom Sturridge: On the Road, Pirate Radio), whose rakish mustache, red uniform and swordplay skills would make Lydia Bennet swoon.

Although Bathsheba says things like "I'm too independent" when turning down proposals of marriage and that she wants a husband who will "tame" her, it's pretty clear that she doesn't really want any husband at all. Well, at least not one in the Victorian understanding of what a woman could expect from a marriage: to be subjugated by her husband, to be required to defer to him on all things.

She wants an equal partner in her life and her business. She cannot be wooed by gifts — you cannot buy or bribe a woman with her own money and resources — and perhaps she can afford to be silly in her choice and choose the man she wants rather than the one who would make the most advantageous match. She can make her decision out of desire and not out of pragmatic need.

Bathsheba isn't perfect, which is what makes her so intriguing. She makes some stupid mistakes — some out of stubborn pride, some of out of boneheaded thoughtlessness — but everything she does or doesn't do is a factor of her work (running the estate), work she loves, being her life: Any romantic entanglements will necessarily impact that and have to become part of it, which is awesome. Womens' lives are complicated! This is more than most movies today are interested in dealing with or even acknowledging.

But this isn't a messagey film: It's a ridiculously romantic one in all the best ways, from the gorgeous landscapes to the sweeping emotions to the soap opera-ish melodrama. It's fun and it's sexy in a way that most movies nowadays can't be bothered with. The only physical intimacy here is a super-sexy kiss at the end, when Bathsheba finally ends up with the right guy and it's hotter than anything I've seen onscreen in ages. Sexy here isn't naked bodies, but bared hearts.

Far from the Madding Crowd (PG-13)

Opens May 15 at Santikos Bijou