Carlos Mencia Returns To SA With New Lease On Life 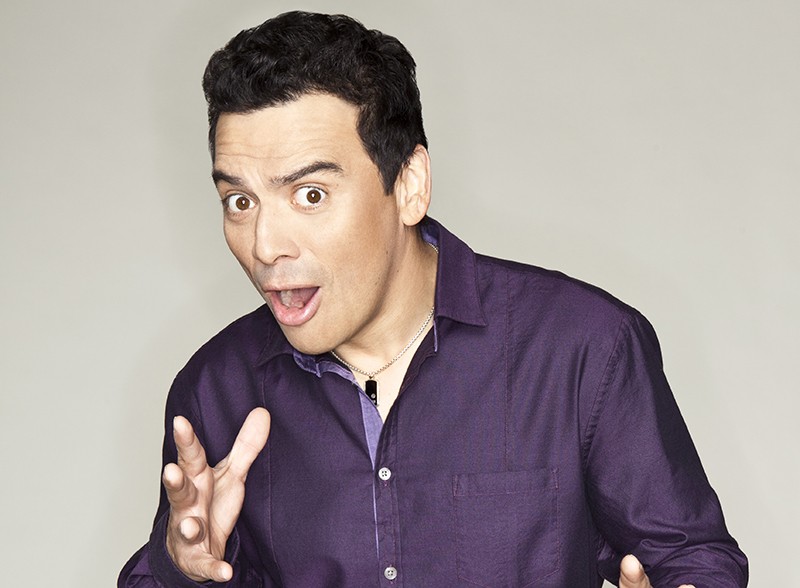 Wipe the slate clean of everything you’ve ever heard or read about Carlos Mencia. At least that’s what the once despised comedian hopes audiences will do as he sets his sights on redeeming his name after years of vitriol aimed at him by the industry he’s inhabited for the last two decades. It won’t be an easy task, but Mencia, 47, isn’t about to quit the funny stuff now. He spoke to the Current last week about his new lease on life.

When I talked to you last year, you seemed to be in a really good place professionally and personally. You told me you didn’t feel like you had to prove anything to anyone anymore. Are you still in that place?

I’m in a better place now, bro. I’ve evolved as a human being and a comedian. I’ve gotten funnier. Well, I’m not sure how much more funny I can get, but you know. I’ve been getting huge laughs at my shows. It’s everything you want as a comedian - the immediate gratification and the verification later about how great the shows were. Right now I’m working on a couple of TV projects, so, yeah, I’m in a good place.

Is there any TV news you can talk about now?

It’s going to be something on cable. We’re about to get the OK and find out how many episodes it’s going to be, so I can’t talk about it until then. But people will be seeing me on TV soon. So, here’s the deal: If anybody wants to see me perform in a smaller venue before things get all crazy, do it because it really feels like by the time I come back to San Antonio again I’m going to be at one of the big theaters.

Does it feel like you’re getting back to that high point in your career when Mind of Mencia was on Comedy Central?

To be honest, I’m a better performer now than I was back then, so I don’t know where it’s going to go. I’m better at what I do. But that’s not important to me. It never has been, bro. When I started doing comedy, I just wanted to be funny. I don’t do this for the money. I’ve already made more money than I could ever imagine. I bought my mom and dad a house. That’s all that matters to me. I could make no more money for the rest of my life and I’d be OK. Now, I think there are a lot of things that need to be talked about comedically speaking. I believe that Carlos Mencia’s voice is a necessary part of what’s going on in the world right now. I’m needed. I’m going to do my best to fulfill that.

Was that message in your comedy always there or is that something that has evolved over the years?

I think it’s always been a part of my comedy in some way, shape or form. I remember after Sept. 11, audiences really needed [comedians] to do jokes about terrorism. I put out an album one week after Sept. 11 that dealt with a lot of those issues. But today we’re dealing with people who get oversensitive about the things around them. I think people are misunderstanding what freedom of speech is really for. Freedom of speech is for that one voice – however awesome or however crazy – to reveal what they really feel. Look at it this way: I don’t believe that [Donald] Trump will ever be voted President, partly because of the things that he said [about Mexicans]. But what if he couldn’t have said those things? We would have never known that he feels like that! I think that’s what people don’t understand. Everyone wants you to agree with the majority of what America agrees with. We’re trying to make the world 78 degrees and want the sun to shine every day. When it’s not, everybody bitches. That’s the wrong approach.

So, do you feel as a comedian it’s your job to inform people that they’re taking the wrong approach to certain issues?

I feel like I need to make jokes about certain things, yes. I feel like that’s my calling. You want to bitch about something going wrong in America? Over half of the world doesn’t have access to drinking water. You want to sit there and complain to me about how bad your life is when you’re pulling into a mini-mart or a gas station so you can get some Fiji water. That’s crazy! Stop it already! You want to sit there and tell me what’s wrong with the healthcare system? Shut your piehole! I believe we’ve lost common sense and perspective.

You say that everyone is oversensitive today. So, what would happen if you went on Twitter right now and made fun of killing a lion on an African safari?

How you talk about what you talk about is unbelievably important because if you write something on Twitter and Facebook and somebody quotes you, you better be ready to defend what you say and how you said it. If I was going to go on Twitter and talk about whatever, I’m going to be very careful. If you go on my Twitter page, you’ll see that I don’t do that a lot. I’ll write something I think is really smart and funny and it ends up being 22 characters too long. By the time I get rid of those 22 characters, I’ve gotten rid of the heart and the message of the joke. In terms of the safaris, if I tweeted something, I would probably say something like this: Listen, I understand how everyone feels because these beautiful, majestic animals shouldn’t be hunted down. But I do find it interesting that in America we spend more money taking care of our pets than we do taking care of our homeless and hungry. You walk out of your house and someone asks you for a dollar and some people will be like, “Why don’t you get a job you piece of shit!” Oh, but that lion! That poor lion! There sure is something fucked up and funny about that, bro.

Would you ever apologize for a Tweet you wrote? Amy Schumer did last month.

I don’t apologize for being funny. I’ll apologize for hurting your feelings. I’ll be sorry that you were hurt by what I said, but I’m not sorry that I did a joke about it. I don’t have anything to apologize for. Everything I’ve ever said, I’ve said for a reason and I can back that reason up. I can tell you why I said it and why I thought it was funny or interesting or important or necessary to say. I refuse to apologize because someone doesn’t know how to take a joke.

In a past interview, you told me that stand-up comedy was like a booty call. You likened hot women to movies and TV and said stand-up comedy will always be there for you if you didn’t get those hot women. Do you still feel that way?

No, because back then I think I needed [stand-up comedy] more than I do now. Today, I go on stage because I love what I do for a living. I love making people laugh. I love knowing that my comedy makes a difference to some people. I love that I’m doing my part in this universe. It’s my gift. If I never did a joke again, I’d be withholding humor and comedy and brevity from the people that really enjoy what I do. I really enjoy sharing that light.

I know you’re a big Los Angeles Lakers fan. I need to hear some insight from you about what the San Antonio Spurs were able to do this summer in free agency. What’s your take?

Listen, man, I don’t even know if you guys needed [LaMarcus Aldridge and David West]. You’re in a competitive [division] and have done amazingly well. At the end of the day, as long as you guys have [Gregg] Popovich, you have a chance at having an amazing year no matter who plays for you. You guys have found a way to play the game with anyone. You guys are lucky. You find people who want to play in a system and you have a system that works. I think next year you guys have something to prove. It would not surprise me in the least if it ends up being the San Antonio Spurs versus the Cleveland Cavilers for the NBA Championship next year. And that’s coming from a Laker fan, so it’s really hard for me to say that you son-of-a-bitch!