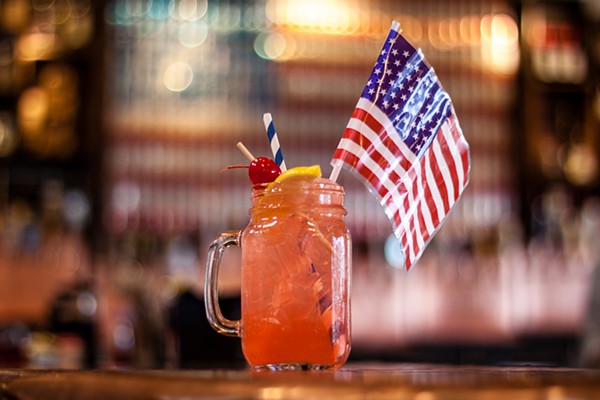 We are thisclose to Super Tuesday, when Texans (and residents of a dozen other states) will cast their ballot in the primary of their choosing for who they think should be our next commander in chief.

Voting is always a little bit of a democracy rush (or is that just me?). Even if your guy or gal has little chance of winning the whole shebang, exercising one’s civic responsibility at its most fundamental level is a good time. Plus, you get a sticker.

The only way this might get better is by throwing one-of-a-kind cocktails into the equation. So you’re in luck! The General Public (17619 La Cantera Pkwy., #102) at The Rim will serve presidential candidate-themed cocktails. Each cocktail ordered constitutes a vote, which will be tallied in real time on a giant chalkboard. Back whoever you voted for in the primary, or whichever drink you think sounds most delicious.

Here's a description of each cocktail from The General Public:

Hillarita – A frosty cold concoction with a liberal helping of Dulce Vida Tequila and Paula's Orange, served frozen or on the rocks (depending on which way the wind is blowing) and delivered in a mason jar by your own private server.


The Socialist – You’ll feel the Bern with this progressive cocktail topped with a scoop of Ben & Jerry's Cherry Garcia and served with a straw of Vermont maple syrup. It’s free, plus $9 in taxes. We'll redistribute $3 of every purchase to Kidd’s Kids.


Trumptini – A rich blend of Karlsson's Gold Vodka and vermouth dusted in gold flakes, served in a martini glass and accompanied by a gold-rimmed plate of caviar. Trust us, it's a winner. Many people have said it’s the best drink they've ever had. Absolutely no foreign ingredients.


Booz Cruz — An unabashedly conservative, Texas-sized punch born in the Canadian Rockies. Stiff as hell and doesn't pair well with anything. You’ll be carpet bombing in no time.


Marco Libre — An overly ambitious mix of Florida ruby red grapefruit juice fused with un-aged Cuban rum. Well-scripted and just as good the second, third and fourth times, it’ll make you feel young again, though a bit out of place at the big kids' table.


Kasich Kosmo – A harmless enough cocktail straight out of the Rust Belt, this nondescript blend of vodka, lime and cherry juice is a popular choice for the risk-averse. Warning: May lead to lame dad jokes.


Ben’s Brain Freeze — An intellectually stimulating yet understated cocktail featuring Plymouth Sloe Gin, hold the fizz. Order this one under your breath and prepare to melt into the background.


The Bush Bomb (#writeincandidate) – A mainstream concoction of vodka, gin, rum and triple sec that tastes like something you've had before and weren't sure you liked. Topped off with a shot of Red Bull to keep you from dozing off early.


The specialty cocktails will be served from 11 a.m. through midnight.