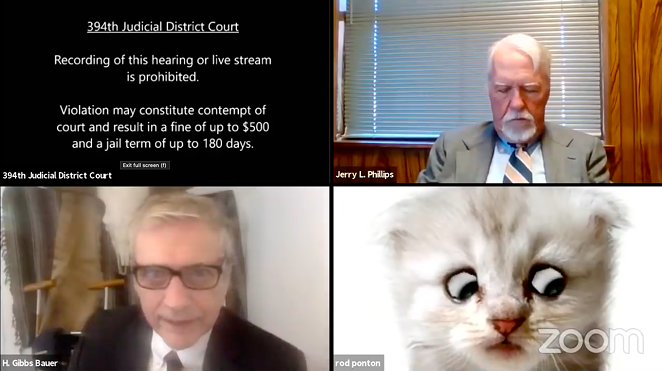 Turns out the West Texas lawyer who grabbed global headlines when a Zoom filter transformed him into a fluffy kitten has something in common with plenty of other viral stars: a complicated past.

Unless you just came out of Internet exile you've likely seen the video clip of attorney Rod Ponton that's been shared millions of times after being uploaded to  YouTube by Judge Roy Ferguson of the 394th Judicial District of Texas.

Ponton seems to be a pretty good sport about the filter flub, and even appeared on the Today show to have a laugh about it. But media reports from the 2010s suggest he didn't have such a laissez faire attitude when he served as district attorney for Brewster County in West Texas.

In 2012 and 2014, then-DA Ponton instigated local and federal raids on a 29-year-old woman's smoke shop that drew scrutiny from media outlets ranging from the progressive-leaning Texas Observer to the Libertarian publication Reason. Reason even produced a documentary about it.


The stories chalk up shop owner Ilana Lipsen's arrest to Ponton's crusade against synthetic drugs and describe the raids as militarized and heavy-handed.

What's more, the reports point out that while the substances seized from her shop — they were marketed as potpourri — tested positive for chemicals banned by the state of Texas, they weren’t against the law when the raids actually took place.

Lipsen even suggested to Reason that Ponton was obsessed with busting her business because she rebuffed him after a one-night stand they'd had when she was a college student. Ponton has defended his handling of the case and told Reason the allegation was a "blatant lie."

"As for Ponton, he's still at it," Reason reporter Billy Binion wrote in a new story posted Wednesday. "His 15 minutes of fame came as he prepared to argue a civil forfeiture case — a helpful reminder that his career is no laughing matter."