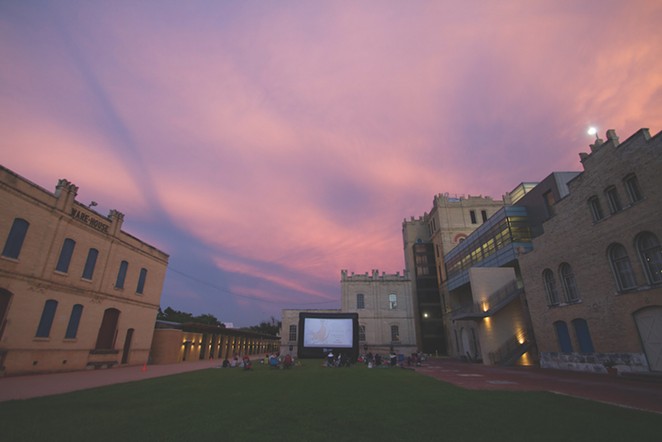 PALLADIUM THEATER • This movie house will celebrate its 10-year anniversary in December 2016 as one of the most impressive of the theaters in the locally owned Santikos chain. From its Greek-influenced architecture to its state-of-the-art IMAX theater to its newly installed Barco Escape that uses multiple screens to present a film, the movie-going experience at the Palladium (17703 I-10 W.) is like no other. Along with first-run movies, the theater also screens special events, concerts and classics like The Maltese Falcon. The theater also likes to work with local filmmakers who want to screen their movies in a professional setting. Let's also not forget the Express Café, arcade, full bar upstairs for the adults and concession stands, which include a gelato and coffee bar.

ALAMO DRAFTHOUSE • There are three locations in San Antonio (Westlakes, Park North and Stone Oak) and all of them deliver the one-of-a-kind style and service you'd expect from this popular movie chain that started in Austin in the late '90s. In addition to their first-run movies, the Drafthouse (drafthouse.com) is known for its Signature Series of movie events like quote- alongs and sing-alongs, Afternoon Tea (period films served with tea and treats), Tough Guy Cinema, Girlie Night and, of course, as many obscure and bizarre movies as you can handle. Pair your flicks with some serious cuisine and libations, served to you in the comfort of your theater seat and table.

BIJOU THEATER • If you're cinematic palate needs more than your average superhero movie or blockbuster hit to get by, take a trip to the Wonderland of the Americas Mall where San Antonio's only independent/arthouse theater lives in the lower level of the shopping center. Here, you can check out the newest foreign films, documentaries and indie movies that usually get a lot of love during awards season. Along with standard concession food, the Bijou (4522 Fredericksburg Road) offers full meals as well as a nice selection of wines. Children under 12 are not allowed, so don't worry about crying babies.

SLAB CINEMA • Since the Mission Drive-In theater (now the Mission Marquee Plaza) closed up shop a few years ago, the local outdoor movie-going experience has evolved into something different, but as equally fun and communal. There are many organizations that host outdoor screenings around the city, but what Slab Cinema (slabcinema.com) owners Angela and Rick Martinez have been able to do with their events is a great way for people to create new memories with their friends and family. Along with outdoor screenings at the Mission Marquee, other sites include Travis Park, Woodlawn Lake, Bulverde Community Park and La Villita, among other venues. Grab your blankets, chairs and snacks and make a night of it.