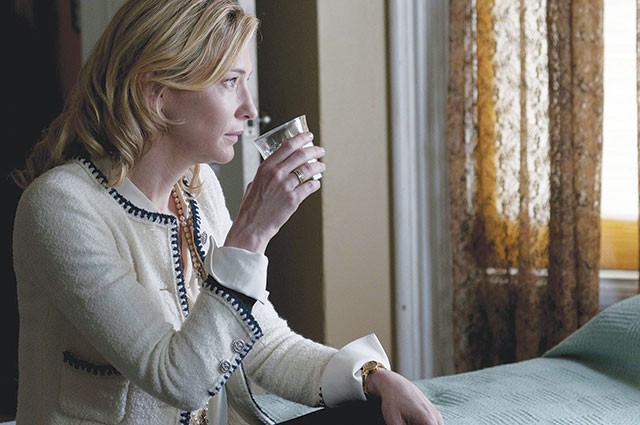 Depending on which side you’re on, every Woody Allen film is either time for celebration, evaluation or neglect. Blue Jasmine won’t earn Allen’s oeuvre any new fans, but it solidifies the momentum he earned with Midnight in Paris (2011) and the underrated To Rome with Love (2012)—Allen may have left Manhattan, but he’s still here.

In Allen’s films, perturbed women don’t get PMS—they suffer from “pre-menstrual nuclear meltdown,” as he put it in Deconstructing Harry (1997). Following Penélope Cruz’s Oscar-winning role as an unstable ex in Vicky Cristina Barcelona (2008), it is now Cate Blanchett’s turn to lose her marbles as Jasmine, the ex-wife of Bernie Madoff-like cheater/embezzler Hal (Alec Baldwin, one of Hollywood’s best onscreen assholes). After choosing London, Barcelona, Paris and Rome for some of his latest films, Allen picked San Francisco as Jasmine’s destination to start a new life. There, a distraught and suddenly broke Jasmine wants to take shelter with her blue-collar, divorced sister Ginger (Sally Hawkins), and that’s where the problems begin.

For starters, Allen’s vision of the lower middle class differs from objective reality. Men, too, seem to suffer from some disconnect; Allen’s male characters are either rich intellectuals or greasy slobs. The duo of Augie (a scene-stealing Andrew Dice Clay as Ginger’s ex-husband) and Chili (a way-more-‘Joisey’-than-’Frisco Bobby Cannavale as Ginger’s new boyfriend) create a two-headed Stanley Kowalski monster to Jasmine’s Blanche (or is it Ruth Madoff, or both?), but at times come across as the “two guys named Cheech” Alvy Singer complained about in Annie Hall (1976). Add to the mix the sweet, unpretentious Louis C.K. as Ginger’s one-time lover, and there you have the time-worn trope: women are crazy because men are stupid.

Somewhere in between the subtle, witty Midnight in Paris (which deservedly won an Oscar for Best Original Screenplay last year) and the explosively sensual Vicky Cristina Barcelona, and without a moment nearly as funny as the singing-in-the-shower scene in To Rome with Love, Blue Jasmine is Allen on autopilot. He seems to have found the perfect formula in order to continue making one film a year with complete creative control and without any pressure to match the excellence of his best work. Besides the obvious references to A Streetcar Named Desire (at one point I thought Chili was going to get on his knees and scream “Ginger!”), Allen—as he has increasingly been doing lately—continues to borrow from himself. The ghost here isn’t Tennessee Williams, but Judy Davis. If Match Point (2005) was basically Crimes and Misdemeanors (1989) set in London, Blanchett’s Jasmine is nothing but a stretched-out Sally, Davis’ character in Husbands and Wives (1992).

“Please don’t fight in here,” Jasmine says at one point, “For some reason my Xanax isn’t kicking in.” It is a line that Davis’ Sally could’ve said. Allen even has Jasmine duplicate a scene that Sally had done 21 years earlier: that purse spilled on the ground, with lipstick, keys and other personal objects tumbling out—a reflection of the growing mess inside these women’s heads and souls.

But Blanchett, just like Davis, is such a terrific actress that she can take possession of a role, adding her own nuances and unexpected twists and turns. Jasmine, unlike Sally, would never go back to her previous relationship and, ultimately, the biggest things these characters have in common are Oscar nominations—Davis got one as Best Supporting Actress for Sally, and you can bet money Blanchett will get a nod for Jasmine.

Yes, Blue Jasmine might be minor Woody Allen and it doesn’t really go anywhere—solving Jasmine’s problems wasn’t in Allen’s to-do list to start with; but there is nothing minor about Blanchett, even if Sally’s ghost is all over the place.