Celery up, Tomatoes Down in This Bloody Cocktail 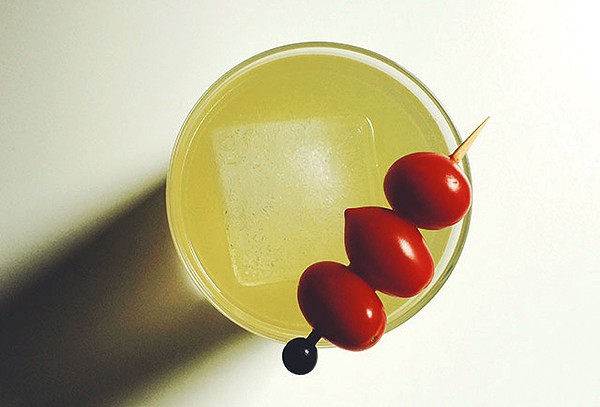 One thing about writing a recipe column: After a while, the columnist's personal picky likes and dislikes become obvious. For instance, I've remixed some pretty obscure cocktails – the Blood & Sand, the Clover Club, the Monkey Gland – but there are a few very common ones I haven't approached. Like the Bloody Mary.

Yeah, I hate 'em. I just don't like tomato juice (so thick and claggy, and almost always metallic-tasting because of the can). And this trend of spicing the juice and overloading the traditional celery garnish by adding cheese cubes and salami and bacon and whatnot – it's just ridiculous, like drinking chili out of a glass. The only part I like is that celery stalk, even if most people just use it as a stir stick and abandon it on the edge of the brunch plate.

So I give you a flipped Bloody Mary; I've made celery the star and moved the tomatoes to the supporting garnishy role. Blasphemy? Perhaps, but challenging the norm is kind of the point with such a classic drink.

I made a quick spicy celery syrup and started experimenting with spirits to come up with a fresh, clean, no-clag cocktail.

I knew I wanted it to be herbal and lightly vegetal, showcasing celery in a starring role, so the vodka I chose was Zubrówka – not the imaginary setting of Wes Anderson's Grand Budapest Hotel, but a Polish vodka infused with bison grass, which gives it a, well, grassy flavor (available at Spec's). I cut the sweetness of the syrup and the infused vodka and added to the celery-green hue with a bit of Chartreuse, an astringent digestif distilled from 130 different herbs and flowers. These ingredients, mixed with some lime juice to balance, were good together, but not

quite complete. As is so often the case, Luxardo Maraschino played the magic supporting role, rounding

things out with its subtly nutty flavor in the background.

For a longer drink, top off with an inch or two of your bubbles of choice (champagne or seltzer), but whether you stick with the highball or go pint-glass, finish off the drink with a dash of aromatic celery bitters. Garnish with a tiny cherry tomato – or just skip the tomatoes altogether and dunk in a celery stir-stalk.

Stir the vodka, tomato juice and lemon juice together in an ice-filled tall glass, then add seasoning to taste. Garnish with celery stalk.

Put the vodka, celery syrup, Chartreuse, Maraschino and lime juice in an ice-filled shaker and shake thoroughly. Strain into a highball glass (or a tall glass, if adding bubbles) and top with a dash of celery bitters.

Wash and finely chop five or six stalks of celery. Bring sugar and water to boil in a large saucepan, then add celery, bring back to a boil and let it bubble for about a minute. Remove from burner and add the lightly crushed cardamom and peppercorns, then the lemon zest to the pan and stir. Let syrup cool to room temperature, strain into a jar, and refrigerate.