The differences are obvious when comparing actor Oscar Nuñez's character on the popular TV show The Office to the one he portrays in the new film The Proposal. While his accountant character Oscar Martinez on the NBC comedy is reserved and well-mannered, his role in the Sandra Bullock movie is a bit more expressive. 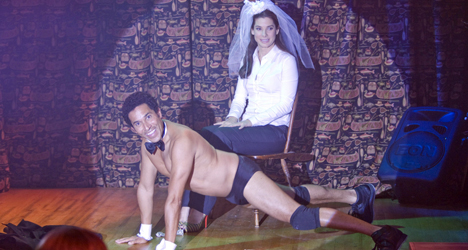 In the film, Nuñez plays Ramone, a resident of a small town in Alaska who is the owner of a general store and a wedding minister. Ramone also happens to be the only male exotic dancer in the entire town. It's a scene Nuñez steals when he is first introduced. During the scene, Nuñez, who is of Cuban descent, shows some skin as he performs a lap dance for Margaret Tate (Bullock), a New York book publisher from Canada who is blackmailing her assistant into marrying her so she won't be deported.

Taking some time to speak with me, Nuñez, 50, talked about shooting his exotic dancing scene and how he became friends with comedy icon Betty White.

Did it feel liberating to let it all hang out in The Proposal since your role in The Office is a lot more passive than the other characters?

Did you have a choreographer or are all those moves your own?

Yeah, I got help with the choreography for that scene. Some of them were my moves. They choreographed the main dance and then I did the other stuff. It was a mixture.

Did you have to audition for the part?

Yeah, I had to audition for it and I actually forgot all about the audition. A month later I got a call that said, “Hey, you got that part!” I was like, “What? What are you talking about? Oh, that! Cool!” So, I got to work with Sandra `Bullock`, Ryan `Reynolds`, Betty White, Craig T. Nelson, Mary Steenburgen and Denis O'Hare. It was a great experience.

What kind of response did you get at the premiere last week for your performance, especially that scene?

It was very disturbing on the big screen, but people loved it. A lot of my coworkers were there `from The Office` like Angela `Kinsey`, Brian `Baumgartener`, and Kate Flannery, among others. When it opens nationwide on June 19, my family is organizing a bunch of people to go see it. They will be shocked and not so much surprised.

It was great. We stayed in the same hotel. We got to drive into work in a van every morning. We talked about everything from how she met her husband to animals. We became great friends. She's really awesome.

What can we anticipate happening with your character in the fall season of The Office?

I don't know. The writers are writing right now as we speak. So, we have no idea what they are writing. I think we start filming shortly after July 21. I can't wait to go back.

How do you explain what a tilde is to people who don't know how to pronounce your name?

Oh, man. I try to pronounce the ñ to them but I gave up a long time ago. I just tell them, “You know, you can just say Smith if you like.”