Changing Downtown: Alamo Architects Plays A Part Then and Now 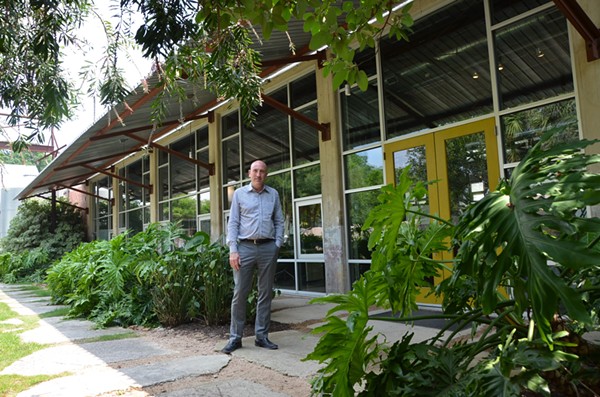 Over six days, a little more than 31 years ago, something truly amazing happened.

A team of maniac San Antonians moved The Fairmount Hotel — a longtime vacant building, circa 1906, that weighed 3,198,907 pounds — from Commerce Street, across Downtown, to Alamo Street, where it sits today, facing a longtime neighbor with a new (and still changing) look: Hemisfair Park.

The feat is a Guinness world record.

“We heard, at the time, that this was a project that only San Antonio could take on,” says Irby Hightower, founding principal at Alamo Architects. “You know, we’re a fan of big parties in this city. It was a moving Fiesta.”

Hightower was one of those maniacs back in late March and early April of 1985.

“Anybody else would have the good sense to not risk it,” Hightower said, explaining how he and Alamo Architect co-founders Mike Lanford, Billy Lawrence and Mike McGlone had just founded the firm. “If you had a good reputation, the last thing you would do is risk it for something crazy.”

By 2019, Alamo Architects will again have a hand in altering Downtown. The firm will serve as the local consultant during the design and construction of San Antonio’s first Class A office tower built since 1989 — a permanent addition to the city’s skyline.

“Sometime fairly soon we’re going to do the public announcement and show the building and all that,” Hightower says. “We’re still checking off all the boxes.”

As for details on the design, Hightower remained coy.

“Well, I think it’ll be different,” he said. “Respectful, but different.”

While undertaking possibly the most dramatic change to San Antonio’s skyline in decades, Alamo Architects is also a member of design teams for two other important projects that also drastically transformed the city’s urban landscape.

Scheduled to coincide with San Antonio’s Tricentennial celebration in 2018, is Civic Park, phase two of the revitalization of Hemisfair Park, first created for the 1968 Worlds Fair. With the completion of the new Henry B. Gonzalez Convention Center, Civic Park will replace the 13 acres where the former convention center site once stood.

Then there’s the San Pedro Creek Improvement Project — a massive idea that targets revitalizing an important and historic waterway that combines flood control with pleasant urban green spaces. That project’s expected completion is also slated for 2018.

After all, the wild success of both the Mission and Museum Reaches on the San Antonio River — south and north of Downtown — have not only restored natural ecological areas, but resulted in development that’s placed the Alamo City in the national spotlight. Why not keep pushing?

However, monumental projects come with awesome costs, which have a tendency to stall big ideas in the Alamo City.

“[Around] 2005 was the first time that a bunch of people thought that you could actually do this. Up until then, it was ‘This was a really good idea but you’re not going to get the money for it,’ whatever it was,” Hightower said. “The groundwork [for those ideas] was in the ’70s. [There isn’t] anything we’ve done Downtown yet that isn’t in a drawing from back in the ’70s.”

And since 1984, Alamo Architects has played part to numerous projects in and around Downtown that have improved quality of life — and the city.

“The sensibility is San Antonio’s always a little behind, but ever once in a while … we’ve made a lot of progress in a short amount of time,” Hightower said.

And Alamo Architects has made an indelible impact on a changing San Antonio.