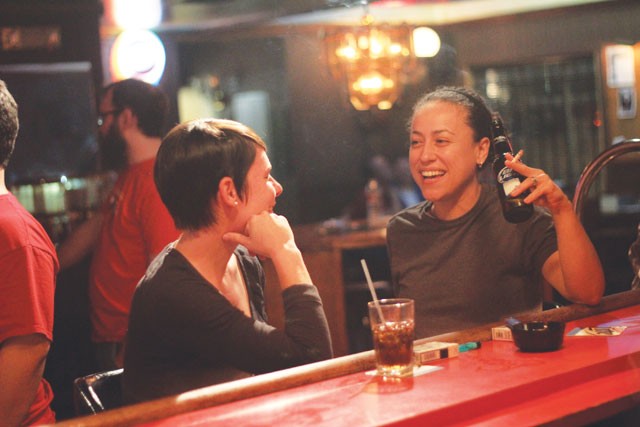 Even though I drive past it all the time, I never really realized 2015 Club was there. Maybe because its unassuming, cottage-like exterior is dwarfed by its ostentatious, yellow neighbor, Banana’s Billiards. Or maybe I’m usually distracted by 2:30 a.m. post-bar tacos at Las Salsas, conveniently located across the street. (It’s probably the latter.)

2015 is a gay bar, but it’s a far cry from the kaleidoscopic, all-night dance parties of LGBT meccas like the Bonham Exchange. In fact, aside from some rainbow appointments to the standard Miller Lite neon signs, a better-than-average jukebox selection, and homoerotic UFC matches on the TV behind the bar, 2015 doesn’t necessarily shout “gay bar.” During our stay, it seemed more like just another place to unwind with friends after a long workweek — which is exactly what we needed. “I’m liking the vibe,” Dr. Adams said. “Everybody wants to get some drinks, chit chat, and get silly.”

That’s not to say that the bar isn’t also for dancers and harder-partiers: 2015 has a lit, cozy dance floor (not utilized much during our visit) and we heard that karaoke nights can get pretty rowdy (also not happening the night we dropped in — but we Scientists are karaoke fiends and will have to stop by again). For gamers, there’s a trio of pool tables and darts.

After the first couple rounds of vodka sodas, we decided to get creative, asking our bartender to mix up whatever he wanted. His shot — the unappetizingly named “duck fart” — was tasty enough, if a tad overpriced at $5.25. Back to vodka sodas, and observing the small but steadily growing crowd. Most patrons opted for pitcher after pitcher of ice-cold beer, a perk not shared by many gay bars in town, according to Dr. Rindfuss. The female Scientists decided we should Sex and the City it up a little, and ordered strawberry vodka with cranberry juice, which Dr. Gonzalez likened to a liquid Jell-O shot. But nevertheless, they were tasty, sweet, and worthy of another round.

Suddenly, around 12:45 a.m., the bar was packed with party people, and the club switched gears (and soundtracks). There was even the occasional bump and grind. We didn’t plan on staying till last call, but time flew by at the 2015, and we decided that we should make it a regular haunt. Over 2:30 a.m. tacos at Las Salsas, Dr. Gillespie probably summed up the evening best: “It’s like hanging out in your cool friend’s garage, except your cool friend has two moms and it’s not awkward.”