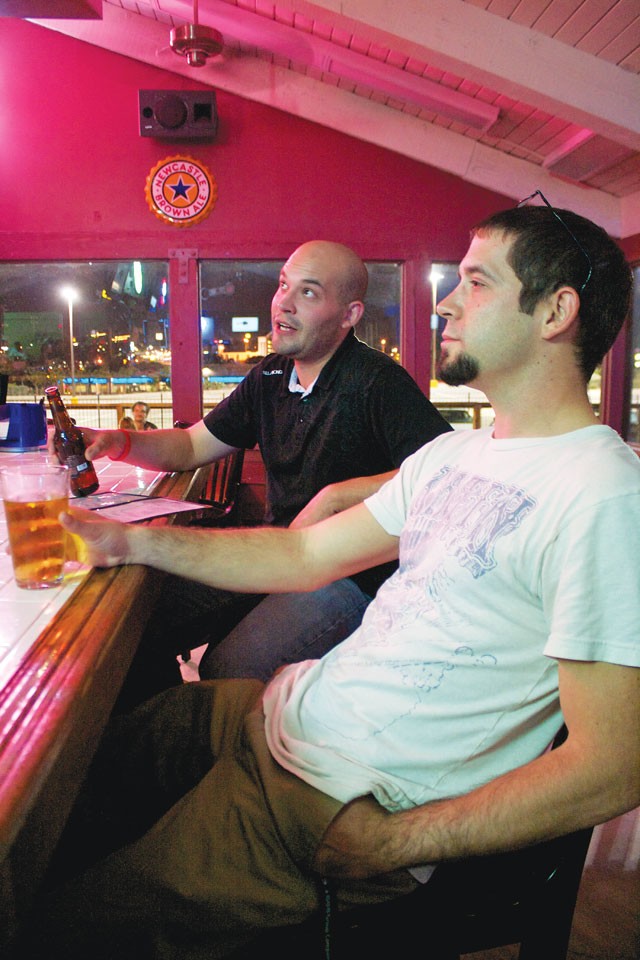 Look closely: Wurzbach Ice House offers a model for our future. The bar sits on the naked concrete slab of a former Blockbuster (*1). Adornments are basic: a wraparound tin bar runs the length of the main room, orbited by some booths. Pool tables and darts are over on the other side, where, if I recall, the Blu-Ray section staged its last stand in the emptying store. Opened last year, the ice house anticipated the smoking ban and so built a wrap-around patio with picnic benches, assorted chairs and the necessaries for a bean-bag toss game some bravely refer to as “cornhole.” There are big windows on all sides, and looking in on all the people drinking amidst all that simplicity, it’s as though the Wurzbach Ice House was built as an exhibit of early 21st-century boozin’, a living museum piece for later generations to understand how we survived these dark days.

Peer into this diorama any night of the week starting around happy hour and there will be crowds that are obviously not coming here for the ultra lounge experience. Truth be told, the ice house has the aesthetic appeal of an abattoir, all blank concrete inside, bare gravel outside, and a fence that looks to be electrified. Doesn’t matter at all. What draws is the reliance on drink specials. Every night’s got one: $1.50 Lone Stars on “Trailer Trash” Mondays, $2.50 wells on the weekend. Also, there’s an excellent beer selection (draft and bottle) at heart — the beauty is in those taps running around that big bar.

Which reminds me: There are a lot of miles of bar for the staff to patrol, so getting a drink on a busy night can really take a while. But occasionally you stumble across little treasures, like the koozie I stole that said, as prescient as anything else in the place, “Stolen from Wurzbach Ice House.”

It’s absolutely a capital-b Bar in the old Texas ice house tradition, which at its simplest is a place to drink drinks with people you may or may not know. The simple, salt-and-lime-of-the-earth ethos works as well here as it does at The Friendly Spot in Southtown, and people seem to respond to it. With the exception of the occasional left-field observation about male nurses at the bar “basically giving each other handjobs” and the delightfully paranoid suspicion that the blank building next door is a spy training complex, online comments about WIH focus on the basics, too: cheap drinks, friendly bartenders, casual atmosphere. No one seems to miss the up-the-skirt mood lighting and table service at llama-hide booths popular with places ringing the outer loop.

Which is what makes a place like this a marvel of recession-era thinking. Raise a good cheap bar upon the ashes of an extinct business model, sell beers in an asphalt landscape of Popeye’s Chicken and covert operatives. Think of the possibilities. There’s a Borders soon to be empty just down the road; get a few hundred feet of tables and some wenches and you’ve got yourself a beer hall in the grand old style. Raise a glass to tomorrow, whatever the hell it is. •

Vibe You know that Roman statue of Romulus and Remus drinking from the wolf’s teats? Imagine the teats have tap handles.

Best Use Any night of the early 21st century.

*1.  A “store” (a place that exchanges goods and services, like the internet except with a door) that would “rent” (like a torrent, except you have to pay for it and give it back eventually) movies in various formats over the years, evolving, before it closed down, up to DVDs (like 8-tracks but with less excellent Jethro Tull). Stock price as of this writing: 0.0710.