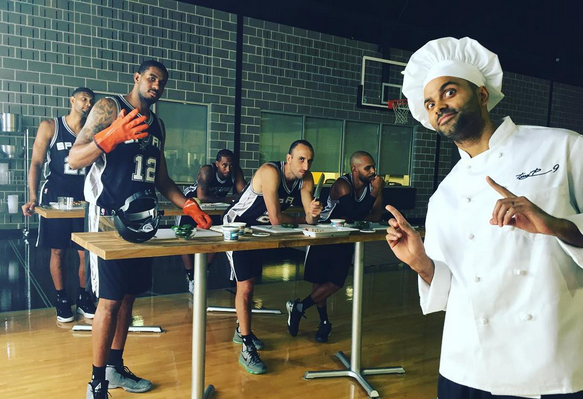 October's arrival marks the imminent return of what is undeniably the greatest thing about fall.

And before anyone starts extolling the virtues of drinkable pie, I'm going to make it clear that, no, I'm not talking about the pumpkin spice latte.

With the cooler temperatures and changing leaves comes the NBA season. But more importantly, with the NBA season comes H-E-B's latest round of legendary Spurs commercials.

The regional television spots, in which the players take off their game faces to showcase how hilarious and adorable they can be while peddling store brand foodstuffs, are wildly popular nationwide.


On Tuesday, the team took a timeout from training camp to film this year's ads. The commercials are expected to debut, as they usually do, in November. This year, H-E-B is making the greatest thing ever even greater by increasing the number of Spurs spots they produce. Fans can expect seven new commercials instead of the usual four, according to Dan McCarney of the San Antonio Express-News.

And as previously reported, LaMarcus Aldridge is joining his teammates on the set. Here's a few behind-the-scenes shots posted on the team and players' Instagrams from yesterday's shoot.

Why is Manu rocking the bucket hat? You'll have to wait for the @heb commercial to find out!

SQUAD on the set of our annual @heb commercial shoot