Check out This Super Cute Wedding Proposal at Viva Vegeria 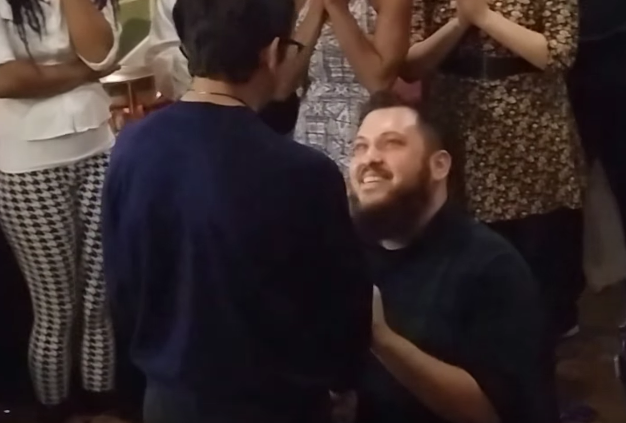 So it turns out that love, actually, is all around us, at least it was on Sunday at Viva , the place with the great vegan nachos.

The vegetarian restaurant off Nogalitos Street was the site of a highly choreographed, Love Actually-themed wedding proposal last weekend. The very public romantic gesture was planned by Fred-Anthony Garza for his boyfriend of two years Stephen Guzman.

Before we get to the video, you'll be happy to know that (SPOILER ALERT!) Guzman said yes.

The proposal begins with local professional dancers, and then Guzman himself, dancing to Ingrid Michaelson's "You and ." Garza told the Current he began planning the proposal back in February, and he recruited SMASH Dance & Fitness to provide the dancers and help with choreography.

The dance into Garza's proposal proper, which took inspiration from that one scene in Love Actually where every viewer loses it. You know the one, where Rick from The Walking Dead professes his love to Keira Knightly via poster board. Garza admitted he has never seen the greatest Christmas movie of all time.  Doesn't matter. The emotional resonance of that scene is universal.

The Love Actually-inspired proposal mirrors a video Garza made to ask Guzman to be his boyfriend three months after the two started dating.

The proposal ends with Garza pulling out a custom antique rose gold ring and asking for Guzman's hand in marriage. The ring features two engraved skeleton arms reaching toward a heart. He collaborated with artist  Dave Vrooman  for months on the final design. Garza and Guzman are both passionate about their Latino heritage, and the ring, which brings to mind Dia de los Muertos, reflects that.

"The ring was a big thing," Garza said. "It was kind of a cool thing to honor our ancestors while honoring our love for each other."

Watch the whole thing below.


"I was completely surprised. I was actually surprised by my friends being able to keep the secret because most of my friends have really big mouths," said Guzman.

He added that he didn't suspect the proposal until more and more friends and family began arriving at Viva Vegeria.

"My mom came up with a great excuse that the family hasn't gotten together for a few months. I actually asked a couple of people there if he was going to proposed to me. They totally kept the secret."

The two plan to wed on November 11, 2017, and are thinking about having a Dia de los Muertos-themed wedding. Each table's centerpiece will have an altar dedicated to a loved one who as passed. So as they look to their future together, they'll also recognize those who came before them.