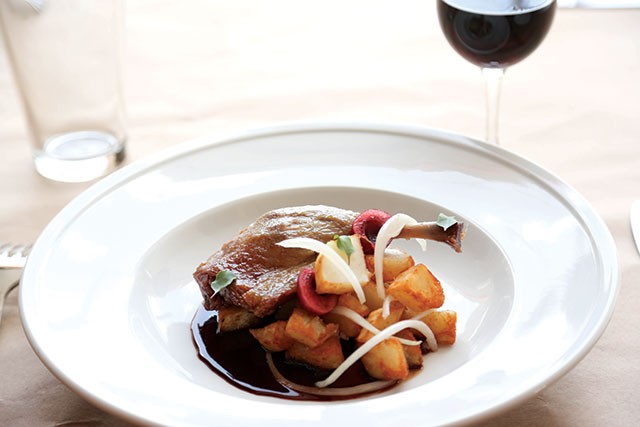 To the chagrin of some, chef Andrew Weissman’s name comes up over and over again amongst the serious eaters of SA. That’s because he’s opened three restaurants in the past five years—each concept more inventive than the last—and is about to revamp one of the two older establishments with which he’s still directly involved. Oh, and the food is damned good, too. Here’s the skinny on his mini downtown-centric empire.

Perhaps the most versatile of the bunch, Il Sogno Osteria (200 E Grayson, Ste 100, (210) 223-3900) delivers on most fronts. Stop by for a relaxed brekkie from 7:30 to 10 a.m. Tuesday through Friday for the frittata of the day or the dreamy coddled eggs. In the evenings, the fun continues with market price Margherita pizzas, or fancier Italian fare (yes, splurging on both the antipasti and famous Nutella tart is worth it).

The Luxury (103 E Jones, (210) 354-2274) caters to the shorts-and-T-shirts set who flock to the SA River-adjacent, outdoor-only spot for creamy chicken curry salads or a Tico sandwich of egg, ham, pico de gallo, avocado, plantain and black beans. Don’t forget the fries–the shareable order of spuds is seriously addicting. Cool down post-run with a brew (or several) from the extensive list of craft beer and wine. Fans of bocce ball can burn off those delicious calories with a spirited game on the restaurant’s court.

The Sandbar Fish House & Market (200 E Grayson, (210) 212-2221) excels with killer sandwiches like the loaded oyster po’boy and the surprise hit in the landlubber Mexican burger, a spicy concoction that pairs beef and ham with jalapeños and avocado slices.

Weissman first opened Sip (160 E Houston, (210) 222-0149) in 2001, but passed the reins to his sister while he focused on other projects. He regained ownership of the spot this January and plans to offer juices, hand-chopped salads and a bona fide coffee program. He hopes to cater to the lunchtime Downtown crowd, while also staying open late into the evening to serve caffeine fiends.