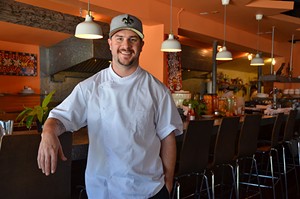 Though it may seem logical for Best Chef to mirror the Best New Restaurant category, San Anto's culinary boom makes it hard to choose just one best of anything. Yet, the case for Sypesteyn is simple. He and partner-in-crime Susan Sypesteyn are restaurant owners beloved by eaters and service industry members; he plays well with others (as an active member of the Alamo City Provisions roving dinner series with buddy chefs John Russ of Lüke, Elise Broz of Houston Street Charities, Diego Galicia, Rico Torres and Jesse Torres of Mixtli, and Luis Morales of Humble House Foods); and most importantly of all, the guy can cook. He shows versatility by serving up both classic N'awlins favorites and modern takes on the Crescent City's fare, and his sauce skillz (yes, they're THAT good) often go unmatched. If the guy's got an ego, we've yet to see it ... or maybe we're too busy stuffing ourselves with crispy duck, gumbo and charbroiled oysters? Folc fans can attest to chef Luis Colon's exuberant take on modern American from his roasted chicken with zesty chimichurri, to his badass brunch. They help tide us over while we wait for his next concept, Alumina.