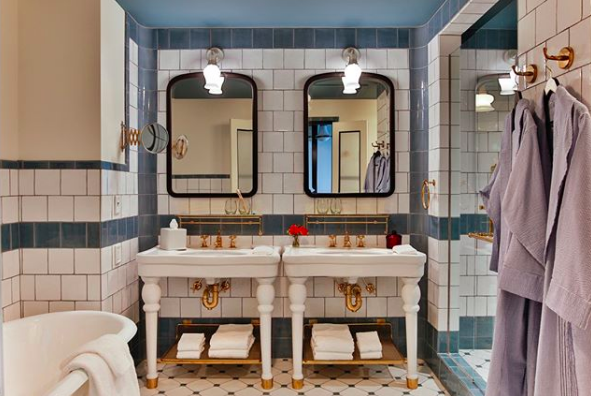 Ahead of her show at the AT&T Center Tuesday night, Cher took to Twitter to sing high praises of San Antonio's very own Hotel Emma.

The music and fashion icon stayed at the Pearl's elite hotel, saying that Hotel Emma may take the cake — she used the cake emoji — even compared to the amazing hotels she's stayed in all over the world.

JUST STAYED IN ONE OF THE MOST UNIQUE,BEAUTIFUL HOTELS EVER.🙌🏻
“EMMA HOTEL,SAN ANTONIO.”
STAYED IN AMAZING HOTELS ALL OVER THE🌎
“EMMA”
MIGHT TAKE THE🎂.
OK,STORY…3 EMMA’S WITH ONE MAN AT SAME TIME.
LAST EMMA SHOT HIM
FOR AN UNPAID BILL🤣.
WHOA GURL👻

Cher even took the opportunity to, in all caps, share a brief synopsis of inspiration behind Hotel Emma, which she called one of the "most unique" places she's ever stayed.

Cher even made it a point to defend Emma's actions.

According to the hotel's website, the story of the three Emmas goes like this. The hotel is officially named after Emma Koehler, the woman who ran Pearl Brewery after her husband, the company's president, died in 1914 (more on that later). She kept the company running during Prohibition, converting portions of the business to dry cleaning, auto repair and making goods like ice cream and soda.

Emma Koehler did all that even though her husband, Otto Koehler, did her dirty. Four years before he died, Emma Koehler was hurt in an auto accident, one that prompted Otto to hire a live-in nurse. The nurse is described as being young and attractive, and also named Emma, though she was nicknamed Emmi. The nurse and Otto began an affair, and he also had an affair with Emmi's friend, named — you guessed it — Emma. Otto reportedly set up a house where he could have secret hook-ups with Emmi and her pal Emma.

In November 1914, Otto went to visit Emmi and Emma, at which point an argument ensued. During the argument, Emma (not his wife) shot and killed Otto. She skipped town, served as a nurse across Europe during World War I and came back to San Antonio four years later to stand trial. She was found not guilty.

Seems like just the type of gal Cher would get behind.