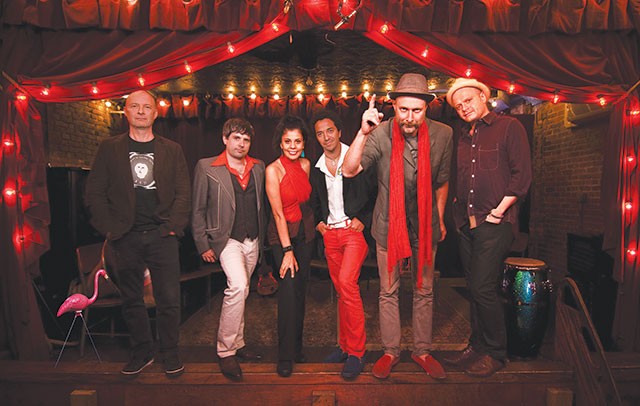 The International Accordion Festival has never been this psychedelic: Chicha Libre, a Brooklyn-based band of musicians from France, Venezuela, Colombia and Mexico, will debut in San Antonio on Sunday and could be the highlight of the festival.

“Chicha Libre is a lot of fun,” said Cathy Ragland, the festival’s curator. “They’re a great group but they’re really kind of ethnographers, music researchers who have discovered a tradition by listening to records that were popular in the ’60s and ’70s.”

That tradition is chicha (pronounced CHEE-cha), a form of forgotten psychedelic Peruvian cumbia from the ’60s and ’70s. My advice: get The Roots of Chicha 1 and 2 (historic compilations released in 2007 and 2012, respectively, by Barbès Records) and Chicha Libre’s own Canibalismo (2012). While you’re at it, check their 2013 cover of “The Guns of Brixton” on the Cuatro Tigres EP. If you’re not immediately hooked, there’s no hope for you.

“It’s chicha, but most importantly, it’s free, liberating music,” said Olivier Conan, who sings and plays the Venezuelan cuatro, a small, guitar-like instrument. A Parisian who fell in love with chicha in 2004 while vacationing in Lima, Peru, he decided to release The Roots of Chicha compilations on his label, and the albums’ success inspired him to form the band, which goes beyond the genre and has elements of Brazil’s tropicália and Afrobeat. “Chicha literally changed my life in a very surprising way, I had no idea all this was going to happen,” Conan said.

For their first SA performance ever, Chicha Libre’s keyboardist Joshua Campbell will play a MIDI accordion and percussionist Karina Colis (teaching in India) will be replaced by Venezuelan Pablo Bencid on timbales. Expect plenty of solos and a practical demonstration of why chicha is suddenly cool after being dismissed as “low-class” music during in its heyday, as was the case with so many Afro-Latin rhythms in the past. Ironically, the band’s distinctive sound (a mix of electric guitar picking and Farfisa-sounding keyboards) mimics that of a Hohner Electravox, an instrument originally manufactured for accordionists who couldn’t get gigs anymore and needed a groovier sound.

“The accordion was considered to be the most uncool instrument, and the same thing happened with chicha, but 50 years later the music’s suddenly cool,” said Conan. “And the reason it is cool is because the music is inherently cool. It has that vintage vibe from the ’70s that people really like, but in a live setting we really stretch it.”