'Chicken with Plums' a story of a fiddler and his truth 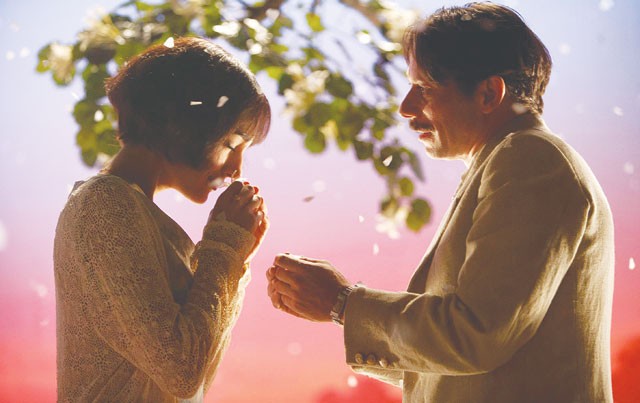 To understand why Marjane Satrapi and Vincent Paronnaud, who brought Iranian émigrée Satrapi's autobiographical graphic novel Persepolis to the screen in 2007, call their latest collaboration Chicken with Plums, you have to wait until more than half of the story unfolds. And to understand why Nasser-Ali Khan (Mathieu Amalric) resolves to die, you have to view the entire film and ponder the complexities of life, love, and art.

Chicken with plums is a sweet entrée that the terminally depressed Nasser-Ali declines when his anxious wife Faringuisse (Maria de Medeiros) brings it to his bedside, but Chicken with Plums is an imported delicacy that, though marinated in weltschmerz, manages to be more savory than cloying.

A voice-over narrator who otherwise speaks French begins with the Farsi equivalent of "Once upon a time," preparing us for a fairy tale set in pre-revolutionary Tehran of 1958. Nasser-Ali, a mustachioed musician of mournful countenance, is inconsolable after someone breaks his violin. Rejecting cruder and more painful means of self-elimination, he determines to take to his bed and expire. During the next eight days, memories and fantasies provide clues to the puzzle of Nasser-Ali's death wish. Essential to the mystery is a beautiful woman named Irâne (Golshifteh Farahani) whose father, a watchmaker who dismisses artists as impractical wastrels, denies Nasser-Ali her hand.

Faringuisse, a shrewish math teacher who recognizes that her husband loves his violin more than her, calls him "a monster" and, in his single-minded dedication to his art, Nasser-Ali is a portrait of the artist as a wretched husband and father. Though his music is sublime, he is a hard man to admire, which saves the film from the banality of romantic melancholy. Painted backdrops, animated sequences, and intensified color add to the film's gauzy charms but also remind us that Nasser-Ali is a victim of his own reveries. A sequence in which Nasser-Ali imagines his son grown up and living out an American dream of kitschy contentment in Wyoming is so over the top that it serves as a caveat against seductive illusions, even cinematic ones. The fact that the suicidal violinist's lost love is named Irâne invites speculation that Satrapi, whose graphic novel was the basis for the screenplay, still pines for her native land — or is slyly mocking cheap nostalgia.