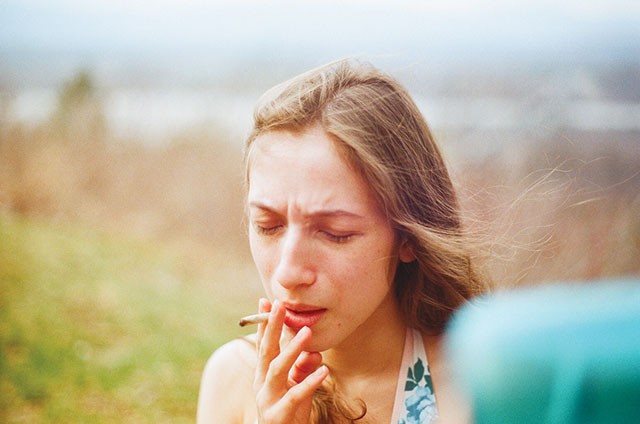 In January, when the St. Mary’s student and aspiring filmmaker decided that she wanted to create a new zine, she had difficulty deciding on a title that was wholly inclusive. Several months later, while brainstorming with co-founder and co-editor Laura Christine Sinner, the two settled on the thematically appropriate “chiflada” and the zine was born.

At first, the name might seem slightly strange for a zine about inclusion, but the reasons behind its selection show how fitting it is. “We took the idea that people of color are typically viewed as ‘bratty’ because they want representation in media,” says Cardona. “Criticisms of the lack of diversity are usually fought with statements like ‘you’re selfish if you want to see yourself in media’ or ‘if you want diversity, go ahead and make your own show or movie.’ So we turned this idea into our own collective of Latin@s [the @ symbol is used to make the word gender neutral and inclusive of everyone, Cardona explains] to express their unique capabilities.”

At a time when popular zines like Rookie Mag have been critiqued as whitewashed, Cardona and her collaborators decided to found their own medium of expression. “We started the magazine because we started to realize that there was a huge lack of Latin@ voices in mainstream culture, especially zines. We wanted to provide a place for our voices, opinions, writings and art because we believe that our representation is crucial.”

For the moment, CHIFLADAzine is only published online. Once submissions are gathered for each themed monthly issue, they are posted throughout the week until the issue is completed. Concerning the future of the publication, Cardona and co. aim to expand into material circulation. “We want to print a copy of our first two issues for the end of the summer, but we’re not sure yet if we will do a physical copy. If we do, we’ll try to sell them at First Friday or other art events.”

Although only a few months old, the infant zine has enjoyed a wide readership across the country due to its promotion through Tumblr and other social media channels. As CHIFLADAzine continues to grow, Cardona has high hopes for its future. “Hopefully, I want to host events for CHIFLADA in different places across the U.S. and meet various readers, artists and writers who support the zine. I also want to come out with a yearly print edition for sale as well.”

CHIFLADAzine is currently accepting submissions (including photography, visual art, poetry, prose, interviews and reviews) for its September issue, which is themed “Transitions.” For details and submission guidelines, visit chifladazine.com/about.