Chill Out, Brah: Music Festivals San Antonians Can Look Forward to as the Weather Cools Down

OMG, y’all – what the fuck was up with summer? Can’t a bish just go for a bike ride around Southtown without fear of being asphyxiated by the hellfire that is San Antonio in the summer? There is something to say about standing outside in 90-degree heat compared to 105 whilst watching our favorite bands tear up a stage. With that in mind, we’ve put together a list of festivals to look forward to as we enter Texas’s cooler months. So stay hydrated, eat some tacos, and we’ll see y’all at these live-music gatherings.

In its sixth year, the San Antonio Music Showcase returns to the St. Mary’s Strip (as well as a handful of venues not far from our live-music district) for a night of some of the best local talent the city has to offer. (Full disclosure: the Current is a sponsor.) From Tejano Orchestras to dreamy garage-pop to folk singer-songwriters and hip-hop, the ever-blossoming landscape of our music scene continues to impress the hell out of us, and we’re excited to show y’all some of the dopest artists who have been in the game for a minute or have been recently making a buzz in the Alamo City. It’s hard not to be more than a little stoked to have one locals-only blowout night, and with 75+ bands slated to slay 19 venues, there’s plenty to be excited about. All you’ll need to set off on an epic exploration of the local music scene is $5 at the door or a $10 wristband, which grants you access to all 19 venues (some of which allow minors). $5-$10, 7pm, various locations, Saturday, September 29. For more information and to purchase wristbands, visit sanantoniomusicshowcase.com. 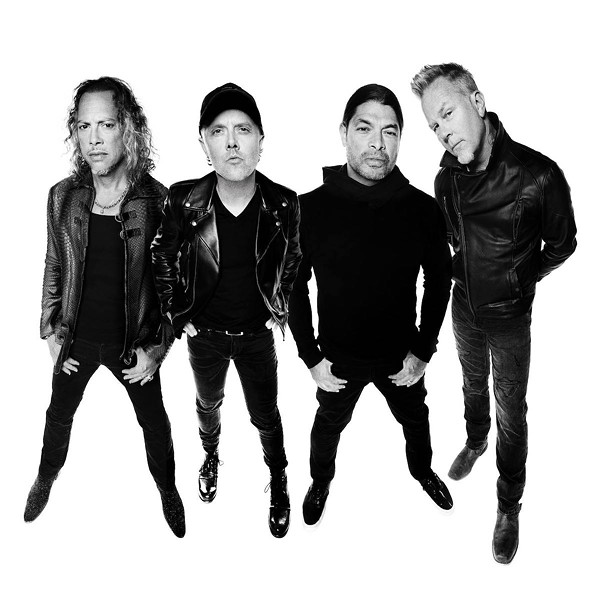 Metallica is headed back to Texas to headline ACL, which is sort of weird and awesome since most of ACL’s headliners recently have been the likes of Radiohead, Jay-Z and Willie Nelson – not gigantic metal acts. If you’ve seen Metallica in recent years, you’d probably be stoked, too, since they usually play very few new songs and a shit ton of their old work, which rules if don’t really listen to anything past the Black album. Besides Metallica, the rest of the headliners include Paul McCartney, “Redbone” singer Childish Gambino, Arctic Monkeys, Travis Scott and Odesza. The full lineup is shaping up to be pretty fantastic, too, with St. Vincent, Janelle Monáe and David Byrne slated for appearances. Tickets can be purchased at aclfestival.com.

Well, damn, Mala Luna, y’all stepped up your game pretty high. Y’all have been holding it down for a few years, bringing in acts like Travis Scott and Steve Aoki in 2016, then Lil Wayne and Future in 2017. So it’s not like super duper surprising that y’all continue to bring in higher caliber acts but... Cardi B, tho. The third annual Mala Luna returns Saturday, October 27, and Sunday, October 28 of Halloween weekend, to the Nelson Wolff Stadium parking lot with none other than Offset’s better half, Cardi B. Alongside fellow headliners Nicky Jam, Dillon Francis and Tyler, the Creator, this is set to be (as of now) the “Bodak Yellow” singer’s first post-pregnancy performance, and we’re more than just a little stoked if you can’t tell. Tickets can be purchased at malalunamusicfestival.com.

UTOPiAfest Down In The Oaks
November 2-4

Last fall, UTOPiAfest (now called UTOPiAfest Down in The Oaks) founder Travis Sutherland bid adieu to his family’s Four Sisters Ranch at the southern tip of the Texas Hill Country in Uvalde County where the festival had been held for nine years. Organizers later revealed that the event will take up residence on a sprawling private ranch near Burnet. “Saying goodbye to our festival’s original home, Four Sisters Ranch, never felt like an ending, but a new beginning,” Sutherland said in a press release. “To be able to expand our UTOPiAn dream and be accessible to more people is an honor. We can’t wait to create an unforgettable weekend in the Texas Hill Country.” Headliners include Grandmaster Flash, singer-songwriter Patty Griffin and Lukas Nelson, son of Willie Nelson. Tickets can be purchased at utopiafest.com.