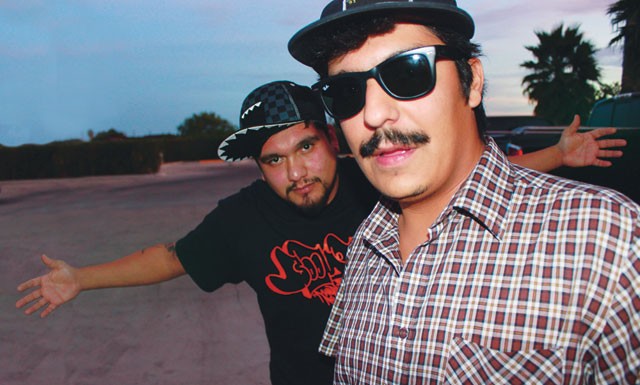 It's an uncharacteristically frigid afternoon in Southtown, and 31-year-old Ariel Faz — the Alamo City hip-hop veteran known simply as R.e.L. — is surrounded by bicycles. Rocking an old-school Spurs cap and his trademark mustache, the new dad settles into the cozy comforts of the Blue Star Brewery's upper confines, becoming increasingly more animated as the talk turns to Chisme. Winners of the Current's 2012 Best Hip-Hop Band award, Chisme is the duo of Faz and producer Eric Frias, aka Progeny, who first turned heads in 2011 with their sample-rich debut album Storytellers.

"Since then things have been going good," says R.e.L. recalling the distant award. The duo has been trying to branch out of the North St. Mary's strip, having played a couple of little mini-tours with Ceschi (owner of Faithfull Records) and planning another one with Fake Four Records' Dark Time Sunshine.* "We're trying to get more into throwing the shows and touring with artists."

Last November, the group released their sophomore effort, In One Ear, Out The Other, a soul-tinged six-track EP that further explores the themes of alcoholism, cultura, and dreams deferred touched upon in their previous work. The disc culminates a 22-month creative process where live performances gave birth to cuts like the geography-infused "Chisme," and the stoic, DJ Muggs-invoking "Weather." Tracks like the optimistic "Drink & Drive" and the rumbling "Ham Sandwiches" capture the duo in fine form, with R.e.L. delivering on-point stream-of-consciousness lyrics over Progeny's textured murky beats. "Breath Deep" eloquently toasts to the land of "kush, margaritas, fruit cups, and freedom," while the stirring mash-up "I Do" (R.e.L.'s favorite) serves as the EP's emotional centerpiece.

"It's a Smiths' sample and it's got a really positive vibe," he said. "We had the beat for a long time and I wanted to rhyme to it. But I couldn't really get the rhyme to do what I wanted it to and not come off very cliché and 'love song.' I found this weird blues track by Lightning Hopkins called 'Suicide Blues' and it fit so perfectly. Right now we're in the process of learning it live. Every time we do it, it's totally different."

For their live performances, Chisme strives to recreate their in-studio magic, combining a mélange of elements including live vocals, MPCs, vocal processors, turntables, and occasionally drums by Chadwick Gonzales. It was this vision that initially brought the duo together, as each was ready to expand beyond the typical call-and-response rap shows that defined their previous projects.

"It's a little less rap and a little more music," says R.e.L. "That's what we're trying to do, be a band. We want to be respected as a band, so we bring our own instruments and try to put together actual pieces of music. I love beats and rhymes, don't get me wrong. I like battle raps. I like all that stuff, but that's just not what we do."