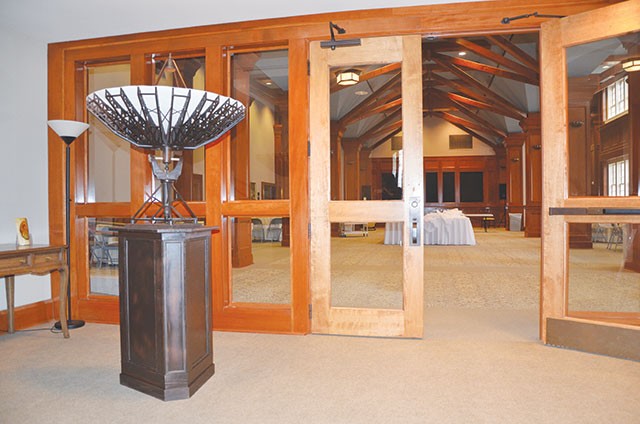 Communion, an elegant wood-and-paper scale model of a radio telescope which echoes the fretwork of exposed wooden beams in the narthex of St. Mark’s Episcopal Church, marks the final chapter and perhaps the culminating take-away of visual artist Chris Sauter‘s four-part pilgrimage.

Communion, together with its podium is about the size of the kind of saint’s statue you light candles in front of (that is to say, maybe half-a-head taller than the average grownup), and appears completely credible as a deliberate part of the church’s sanctuary. But it puts on conceptual weight once one has seen the previous three exhibitions: “Doubt,” “Faith and Reason,” and “Shape of the Universe.” Sauter’s interest in outer space is present in the lofty equipment he represents, of course, but the meticulous details—the tiny dark wood beams, the church-like varnish smell of the hand-built podium, the curved finials, feel like winks at NASA and da Vinci.

“Doubt” at the Southwest School, the largest of the four shows, is this pilgrimage’s triumphant come-on (he refers to it as the key of the entire exhibition). It contains statement pieces—the re-imagined pew, the large felt banners, the multimedia installation. The comparatively austere collection of photographs at Blue Star, “Faith and Reason,” signifies moments of divine awe occasioned by air travel. Fl!ght Gallery’s “Shape of the Universe” elevates houses of worship and their architectural outlines into de facto containers of the deep universe.

Communion, then, is simply and profoundly what it says it is, i.e. a concord between the terrestrial and the divine. The radio antenna is an icon and, on Sauter’s watch, a newly described locus of wonder and longing. At a brown bag lunch art talk at Blue Star last Wednesday, Sauter shared some of the philosophical backstory to his science-religion opus. Of Communion, he said, “I started thinking about what one does in church. One of the things one does is one waits, and listens for a communication from the divine.”

Communion invites you to walk around the model in a circle, to stand behind it and look past/through it into the narthex, to climb partway up the nearby flight of stairs to peer down into it. Less of a visual stunner than several of the pieces in “Doubt,” it requires contemplation in place of reaction.

Sauter said of the piece and its appropriateness to its setting, “Church is about ... being patient with the unknown and the sacred,” and added “radio telescopes are very similar. We are listening faithfully to understand something about our universe and ourselves.” He pointed out that radio telescopes are two-way; they broadcast messages a la the “we’re here” message that the SETI (Search for Extra-Terrestrial Intelligence) Institute sent out in 1974. Said Sauter, “When we send signals out into deep space it’s definitely an act of faith, because we don’t know what’s out there.”

And we wait to receive.

One element of Sauter’s pilgrimage is yet to come: Rumor has it that there may be an apparition of St. Apophenia before the end of January. St. Apophenia, whose images graces the “To Use in Pilgrimage” brochure/map given at each stop of the exhibition, is the patron saint of “pattern-makers, coincidence, fortune tellers and the insane.” She has her own website and Facebook page, but you won’t find her in the standard rubric of Catholic saints. Sauter refers to her as an artwork, stipulating that many more-orthodox saints are amalgams of several people, or possibly partly-fictional. Apophenia “appeared” during Luminaria of 2013, as an amalgam of images Sauter projected on the Convention Center wall.

Perhaps the divine radio telescope of Communion is a symbol of St. Apophenia, hence a symbol of a symbol. This is right in line with the central theme of Sauter’s doctrine, that the divine inhabits religious practice and scientific exploration. And that, in his words, “the division between science and religion really is false. And just so dangerous, actually. Science, of course, is man-made because science is a systematic approach that man has come up with to question and test ideas about how the world works. It didn’t come from anywhere; we came up with these ideas. Science, at the very beginning, was magic.”

Coming as it does in the midst of awards season, it’s fun to think of the acceptance speech that Sauter might make at the conclusion of his four-part art pilgrimage delving into the false dichotomy between religion and science. Sauter gainsays any autobiographical content to his pilgrimage—or as much as is possible being that it is the work of one guy, but still. He is the common denominator, he would be on the podium.

I’m thinking something like, “I’d like to thank the whole team behind our human understanding of the magnificent mysteries of the divine, including Abd al-Rahman al-Sufi, Nicolaus Copernicus, John Polkinghorne, Peter Higgs and Francois Englert, and Galileo.” Then, as the usher-him-off music plays behind him, he raises his voice and his trophy and cries, “This is for you, St. Apophenia!”