Throwback Thursday: Frontierlandia ∙ The winner of CineFestival's 1996 Jury Prize, this is the biggest trip you can have at this year's fest. At times straight-ahead documentary, at times travelogue, this unpredictable, highly entertaining Culture Clash-meets-Monty Python extravaganza explores border life, the spirit of Aztlán, Mexican death metal and features Guillermo Gómez Peña as a talking cockroach. The film will be preceded by Femina-X's "Frida's Heart" video, directed by Laura Varela and Daniela Riojas, who will be in attendance along with Frontierlandia co-director Rubén Ortiz-Torres. 6:30pm Thu, Feb. 25.

Washington Heights ∙ Well-acted 2002 film set in the New York neighborhood of the same name and based on a story co-written by director Alfredo De Villa and a young(er) Junot Díaz. Need we say more? 8:30pm Thu, Feb. 25.

Cantinflas ∙ I was never able to document its veracity, but there is a famous old quote by Charles Chaplin, who knew a thing or two about comedy: "Cantinflas is the greatest comedian alive." I couldn't agree more. Mario Moreno "Cantinflas" (1911-1993) was Mexico's ying to rival Tin-Tan's yang, but his impact was such that, in 1992, Spain's Royal Academy included three new words in its dictionary: cantinflear ("to speak in an absurd manner without saying anything"), cantinflada ("a person who talks or acts like Cantinflas, Mexican actor," and cantinflas ("A person who talks or acts like Cantinflas"). He won a Golden Globe for Best Actor (Comedy or Musical) for Around the World in 80 Days (1956), but this 2014 biopic directed by Sebastián del Amo was panned by critics. However, Cantinflas' portrayal by Óscar Jaenada is so good that you won't even notice the dude's from Spain. It's a masterful, dead-on impression I won't mind watching again and again. This senior screening is free and open to the general public. 9am Fri, Feb. 26. 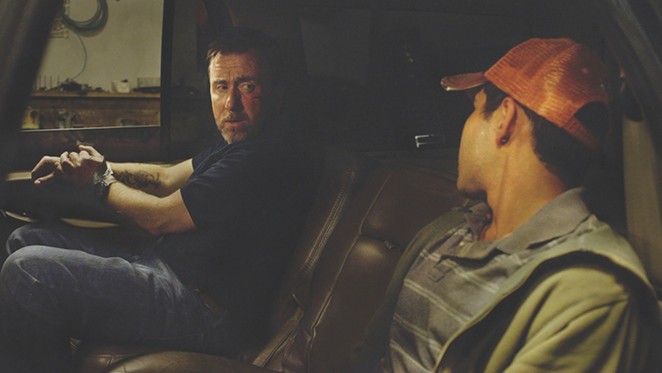 600 Miles ∙ Tim Roth as an ATF agent on the hunt for illegal gun smugglers moving assault rifles from Arizona to Mexico, but when he's about to catch the Mexican kids, he's kidnapped by them instead. But ... surprise! He kind of befriends his captor and ... Familiar, right? Not only that: Director Gabriel Ripstein (the son of Mexican director Arturo Ripstein) didn't have a better idea than to name Roth's ATF agent "Hank" (any Breaking Bad fan will get my point). Fortunately, the movie is not nearly as bad as its plot, and it deservedly won Best First Feature at the Berlinale in 2015. "This isn't a gangster thriller," Ripstein rightly told The Hollywood Reporter upon winning. "It's a much deeper and more involving drama than the plot summary would suggest." 7:30pm Fri, Feb. 26.

Los Punks: We Are All We Have ∙ Backyard Latino punks in East L.A., South Central, Watts and Boyle Heights. Mexicanos making noise at home and in black neighborhoods. A must-see documentary about one of the wildest, loudest underground scenes in LA. 9pm Fri, Feb. 26.

The Other Barrio ∙ Richard Montoya was always my favorite member of Culture Clash, the San Francisco-based Chicano comedy team. In this neo-noir directed by Dante Betteo and co-written by him and Montoya based on a story by 2012 SF poet laureate Alejandro Murguía, Montoya shines as a housing inspector and gets a chance to shows all his range. Music by five-time Grammy nominee producer Greg Landau, who also scored La Mission. 4pm Sat, Feb. 27.

Closing Night: Bordertown ∙ I must confess I stopped watching after the first two episodes of Fox's new animated series about Border Patrol agent Bud Buckwald and Mexican next-door neighbor Ernesto González, but I'm not ready to completely give up on Mexifornia, the fictitious town where the action takes place. Reviews have been mixed, yet it's too early to dismiss the series, created by Family Guy writer Mark Hentemann and executive-produced by Family Guy creator Seth MacFarlane. That's why I want to see these two brand new episodes at CineFestival, complete with an extended Q&A with series writer and consulting producer Lalo Alcaraz (the cartoonist behind La Cucaracha) and SA actor Nicolás González (the voice of Ernesto, whom Mendiola calls "the future of Latino acting in the U.S.A."). Too bad the other consulting producer, Gustavo Arellano (of Ask a Mexican! fame), couldn't make it, but Alcaraz's presence guarantees lethal comebacks whenever a bigot heckles from the audience. 7:30pm Sat, Feb. 27.