Cinematic Spillover: Short Reviews of Abominable and The Death of Dick Long

Here are a couple of short reviews of movies that will be released at San Antonio theaters on September 27.

When did yetis become the new animated hero? Earlier this year, moviegoers got Missing Link, a film about the legendary ape-like creature, this time wearing a bow-tie, searching for his family with the help of an explorer. Last year, the script was flipped when Smallfoot introduced audiences to a yeti who finds a human being and brings him back to his village. In Abominable, the yeti is portrayed as more of a big, shaggy dog rather than a creature with human-like traits. The end result isn’t a film with a lot of unique bones in its fluffed-up body, but it’s easily the sweetest version of the most recent animated films about the mythical Abominable Snowman. Also, it's great to see more studios starting to understand that representation matters – even in animated films. With a mostly Asian cast, who does an incredible job with the movie’s voice work, Abominable is a colorful, creative and culturally-competent delight. Abominable opens nationwide September 27. 3 out of 5 stars (recommended)

The Death of Dick Long 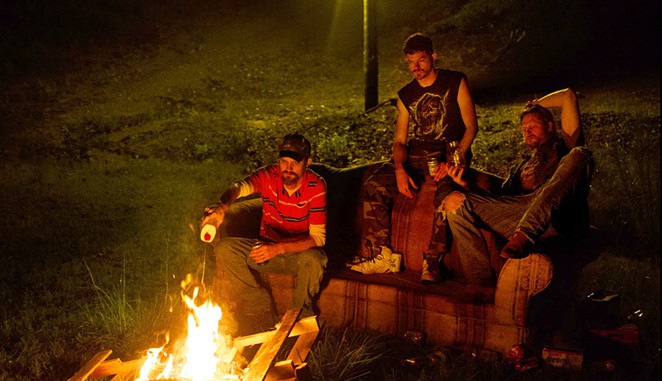 Dick Long is dead. His best friends Zeke (Michael Abbott Jr.) and Earl (Andre Hyland) know what happened, but they don’t want to go to jail, so they don’t tell anyone. Plus, no one has identified Dick’s body yet, so they’re sort of just hanging out and buying time until they figure out what to do. The biggest problem with that plan, however, is that Zeke and Earl are idiots and the situation they are dealing with is way over their heads. It’s a great setup for a dark dramedy that is an interesting mix of early Coen brothers (Blood Simple) cinema and something that would come from the head of a filmmaker like Todd Solondz (Happiness). Directed by Daniel Scheinert (Swiss Army Man), who also plays the dead title character, and written by first-time screenwriter Billy Chew, Dick Long is a warped Alabama backwoods narrative that is earnest in its depiction of depravity and anguish. Whether we’re talking about characters like Gale Snoats from Raising Arizona, Carl Showalter from Fargo or Shawn Eckardt in I, Tonya, it takes some serious comedic timing to portray a criminal trying to pull off a complex job without the necessary mental capacity to do it. Abbott and Hyland capture those attributes extremely well and do it without having to play up the yokel stereotypes. The Nickelback and Staind references, however, are welcomed. The Death of Dick Long opens exclusively at the Alamo Drafthouse Park North September 27. 3.5 out of 5 stars (recommended)