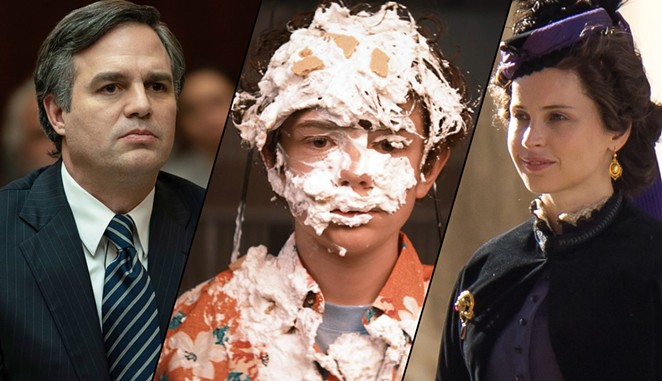 
In The Aeronauts, Oscar winner Eddie Redmayne and Oscar nominee Felicity Jones pair up for the first time since playing husband and wife in the 2014 biography The Theory of Everything on late theoretical physicist Stephen Hawking. Redmayne portrays real-life meteorologist James Glaisher, who inspires Jones’ fictional hot-air balloon pilot Amelia Wren to take to the skies with him to “rewrite rules of the air.” While the glorious aerial imagery is what keeps The Aeronauts’ head above the clouds on occasion, the film’s script by Jack Thorne (Wonder) fails to create a compelling story when the duo find themselves on the ground or speaking to one another or — basically — doing anything that doesn’t include them ascending into the unknown. Directed by Tom Harper (his 2019 musical drama Wild Rose is his real gem this year), The Aeronauts may have enough material to deliver a visual feast, but the period piece’s beauty and spirit, while undeniable when soaring thousands of feet above the earth, hits some waves of stale air along the way. The Aeronauts opens exclusively at Santikos Silverado December 6. 2.5 out of 5 stars (not recommended)


Modern-day corporate thrillers as great as 1999’s The Insider and 2007’s Michael Clayton don’t come along too often. Once films start following a handful of paper trails, it takes an extremely talented filmmaker to keep the narrative from getting lost in the piles of documents that are used to prove the deceitful things big companies do when they think no one is watching. Director and Oscar-nominated writer Todd Haynes (Far from Heaven) manages to stay out of the weeds for the most part, but Dark Waters doesn’t feel as urgent as one might like from a film featuring a familiar scene where a character looks over his shoulder in a dark parking garage. Based on a true story, the film stars three-time Oscar nominee Mark Ruffalo (Spotlight) as Robert Bilott, a corporate defense lawyer who finds out chemical company DuPont has been knowingly poisoning the residents of a small farming town in West Virginia, and sets out to bring them justice. The term “whistleblower” might be more popular in today’s lexicon than in past years because of the ongoing presidential impeachment inquiry, but Dark Waters is far too average to make an impact for its cause. Plus, in a year brimming with these kinds of films, The Report and Official Secrets do it much better. Dark Waters expands to more local theaters December 6. 2.5 out of 5 stars (not recommended)


In Honey Boy, underrated actor and first-time feature screenwriter Shia LaBeouf (The Peanut Butter Falcon) exposes his owned troubled childhood under the care of his reckless and demanding father. In a courageous move, LaBeouf decides to portray his own dad – a character who attempts to help maneuver his actor son Otis (Noah Jupe as a child; Lucas Hedges as a young adult) through the Hollywood industry as his manager. It’s obvious early on that LaBeouf doesn’t want to repress anything in his screenplay. In letting it all out, the emotional weight of his personal story drives Honey Boy into places that are heartbreaking and deeply honest. In the last few years, LaBeouf has made headlines for some legal problems stemming from alcoholism. His skill, however, has never been doubted for those who can see some of that untapped potential. Here's to hoping he has exorcised those demons, so he can deliver more of his soulful storytelling and committed performances. Honey Boy opens exclusively at Santikos Bijou Cinema Bistro December 6. 3.5 out of 5 stars (recommended)