Here are a few short reviews of movies that will be released on March 29 in San Antonio theaters, Netflix or VOD platforms.

Diane is a rarity in Hollywood – a film that gives the starring role to an actress in her 70s and surrounds her with more veteran actors to tell a story of true friendship, enduring love and fading life. Actress Mary Kay Place (TV’s Big Love) stars as the title character, a woman of a certain age who is all heart. When she’s not checking up on her addict son Brian (Jake Lacy), Diane spends her time giving back to others. In the film, we see her visiting her terminally ill cousin in the hospital, volunteering at a soup kitchen and having meals with friends. Her spirit is perpetual, but is always tested. Like Glenn Close did in her Academy Award-nominated role in The Wife last year, Place communicates everything she wants audience to know with her eyes. It’s an incredibly intimate performance that hinges on how much Diane is willing to handle and how well Place is able to convey those fears and regrets. Written and directed by Kent Jones (Hitchcock/Truffaut), Diane is a film of comfort – a subtle exploration of a compassionate life devoted to the care of others. With Place playing the charitable woman at the center of the narrative with such sincerity, it’s a truly uplifting experience. Diane hits VOD platforms March 29.
3 stars out of 5 stars

Walt Disney is banking on the idea that audiences want to continue seeing its classic animations adapted into live-action movies for the next few years. The studio did a wonderful job when it gave the reigns to Oscar-nominated director Kenneth Branagh (Henry V) for the Cinderella remake in 2015 and then to director Jon Favreau (Iron Man) for The Jungle Book the following year. Less impressive was director Bill Condon’s 2017 remake of Beauty and the Beast, which felt nostalgic albeit uninspired. In Disney’s latest live-action revision, the studio takes on the 1941 animated film Dumbo, a sweet but ultimately hollow story of a floppy-eared circus elephant who is separated from his mother and later learns he can fly. Director Tim Burton (Sweeney Todd) uses his gothic style to darken the mood and screenwriter Ehren Kruger (Ghost in the Shell) takes the narrative into unfamiliar places in comparison to the cartoon, but when the titular pachyderm is not front and center, Dumbo feels like it’s gliding, not soaring. Dumbo opens theatrically nationwide March 29.
2.5 stars out of 5 stars 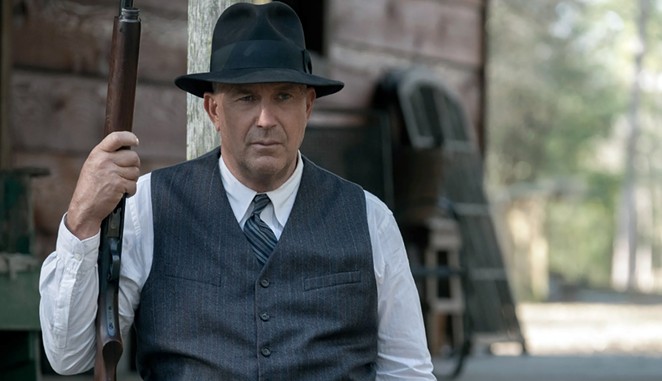 Directed by John Lee Hancock (The Blind Side), The Highwaymen tells the mythic story of Bonnie Parker and Clyde Barrow, two outlaws and lovers who committed murders during the Great Depression, told from the perspective of the Texas Rangers who finally brought them to justice in 1934. If you’ve seen the original 1967 biopic Bonnie and Clyde starring Warren Beatty and Fay Dunaway or have read a little about the “Public Enemy Era,” you know how the story ends. Spoiler alert: Bonnie and Clyde, who were infamous celebrities at the time, were riddled with bullets by a posse of officers, including the two main Rangers depicted in The Highwaymen, Frank Hamer (Kevin Costner) and Maney Gault (Woody Harrelson). In Hancock’s film, Frank and Maney are recruited out of retirement to follow the trail of dead bodies left behind by the deadly duo. Costner and Harrelson serve their well-aged characters appropriately and the film exhibits some adequate table setting, but the formulaic screenplay by John Fusco (Young Guns) leaves much to be desired, especially since there are no real unexpected surprises. The Highwaymen premieres on Netflix March 29.
2.5 stars out of 5 stars

The Legend of Cocaine Island

Put The Legend of Cocaine Island under the category of stranger-than-fiction documentaries that feature at least one eccentric real-life character whose brain should probably be studied by scientists as soon as possible. Think Billy Mitchell from 2007's The King of Kong or Frédéric Bourdin from 2012's The Imposter or Shannon Whisnant from 2015's Finders Keepers. These guys are just weird dudes, but it's impossible to look away. The same can be said of Andy Culpepper, who is only a secondary character in Cocaine Island, but a memorable one. He's a tripped-out Floridian who plays the sidekick to main man Rodney Hyden, a construction company owner who get mixed up in an unbelievable scenario where he finds himself searching for $2 million worth of cocaine, which may or may not be buried on a remote island off the coast of Puerto Rico. As crazy as that already sounds, director Theo Love (Little Hope Was Arson) ratchets up the storytelling by creating a hybrid type of exaggerated fairytale and meta-style re-enacments where the real people of the story depict themselves and recreate scenes in narrative form. At times, Love curates his content too much and it becomes difficult to consider Cocaine Island a trustworthy documentary. The film's entertainment value, however, far outweighs whether or not Love is playing by any unwritten rules. Call this one Narcos for Dummies. The Legend of Cocaine Island premieres on Netflix March 29.
3 stars out of 5 stars