Cinematic Spillover: Short Reviews of Fighting with My Family, Never Look Away, Arctic and More

Here are a few short reviews of movies that will be released between February 22-26 in San Antonio theaters or on VOD.

As with most one-man survival stories for the big screen like 2000's Castaway starring Tom Hanks or 2013's All is Lost starring Robert Redford, the majority of the film’s emotional stock is put solely in the hands of the lead actor to see if he can get audiences to follow him on what many times turns into a tedious journey. Luckily, in Arctic, Danish actor Mads Mikkelsen (The Hunt) is up for the physical challenge as Overgård, a man stranded in the unrelenting snow after his plane crashes somewhere in the Arctic Circle. With little hope on his side, Overgård ventures out into the cold, white abyss along with a surprise companion who basically serves as another weight on his back. Director/co-writer Joe Penna draws out an honest performance from Mikkelsen and uses the quietest moments to allow moviegoers to feel the pain and exhaustion the film's protagonist is experiencing. It's quite an impressive feat the cast and crew have accomplish, especially Mikkelsen whose subtle expressions speak volumes. Arctic opens exclusively at the Santikos Bijou on February 22.
3 stars out of 5 stars 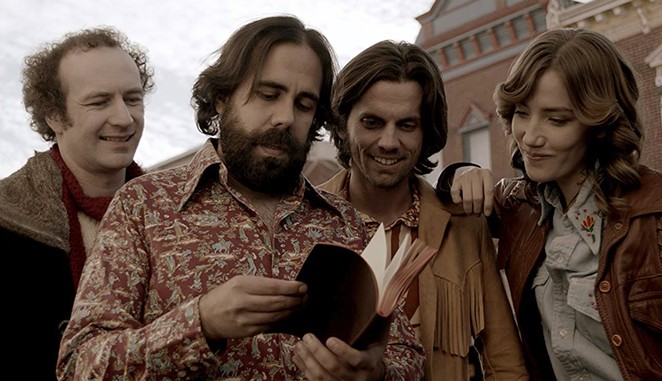 Set in 1977, a group of four college friends reunite for a bachelor party in a small Kentucky town, but decide to take a detour when they hear about a treasure buried in the nearby wilderness. When it turns out the legend is true, the foursome find themselves battling past demons, greed and jealousy as their world begins to spiral out of control. Written and directed by David McCracken (Ostrichland), Bullitt County features some tense moments between characters who have everything to lose, but the overall tone of the picture doesn’t end up registering on an emotional level. Actor Mike C. Nelson (TV's Black-ish) as the hotheaded and former alcoholic Gordie has the most layered role, but by the time all the twists and turns are revealed, McCracken hasn't given audiences enough of a reason to care if any of the friends actually make it out of the woods alive. Bullitt County hits VOD on February 26.
2.5 stars out of 5 stars

A young-adult fairytale trying to disguise itself as something more complex, The Changeover might have an unnerving and memorable performance by English actor Timothy Spall (Sweeney Todd), but it lacks the narrative horror chops to push the storytelling into a dimension that is truly compelling. Based on the 1982 novel of the same name by author Margaret Mahy, the film follows Laura Chant (Erana James), a teenager living with her mother Kate (Melanie Lynskey) and little brother Jacko (Benji Purchase) in a small New Zealand town. Laura spends most of her days taking care of Jacko while their mother is working. They soon meet Carmody Braque (Timothy Spall), a local creep with supernatural abilities, who is set on using Jacko’s youth to preserve his power. Laura, however, learns that she, too, has otherworldly abilities that may save her family from Carmody’s evil grasp. Spall shines, but James, unfortunately, doesn’t do much with her lead character, which could have easily been plucked out of a Twilight lineup. Chalk up The Changeover as a second-rate YA adaptation – without the brooding vampires. The Changeover hits VOD on February 22.
2.5 stars out of 5 stars

Fighting with My Family

The dependable sports drama formula works well in Fighting with My Family, the inspirational true story of how female professional wrestler Paige made it onto the World Wrestling Entertainment (WWE) roster in 2014. With British writer/director Stephen Merchant (TV’s The Office) in the driver’s seat, the final result feels almost effortless, especially since the screenplay and the sport itself don't lose their top billing to less important love stories or unnecessary melodrama. Moviegoers don't have to be fans of professional wrestling to appreciate the universal messages behind Fighting with My Family. It's a charming, light-hearted dramedy and easily the best movie project that WWE Studios has ever had its hand in producing. Merchant’s script is rife with humorous dialogue and Pugh’s portrayal of an outcast, punky wrestler proves to be inspiring, although she isn’t as hyper-sexualized in the film as most of the “divas” of the WWE, which, in a sense, clashes with the empowering themes of the movie. Nevertheless, Fighting with My Family is a sure-fire crowd-pleaser. Fighting with My Family opens at theaters across San Antonio on February 22.
3 stars out of 5 stars

Recently nominated for two Academy Awards (Best Foreign Language Film and Best Cinematography), Germany’s Never Look Away is a sprawling and sometimes unsteady period piece. It's written and directed by Florian Henckel von Donnersmarck, who was behind one of the best foreign language films of the last 15 years, 2006’s Oscar-winning The Lives of Others. Never Look Away tells the story of Kurt Barnert (Tom Schilling) – a character loosely based on real-life artist Gerhard Richter – a German artist whose past comes back to haunt him when he begins a relationship with fashion student, Ellie Seeband (Paula Beer), whose monstrous father (Sebastian Koch) was part of the Nazi regime. Clocking in at just over three hours, Never Look Away comes across as pretentious when exploring the art world in the second half of the film and goes into unnecessary tangents, but von Donnersmarck's overall vision is epic when it stays focused on its history. Never Look Away opens exclusively at the Santikos Bijou on February 22.
3 stars out of 5 stars