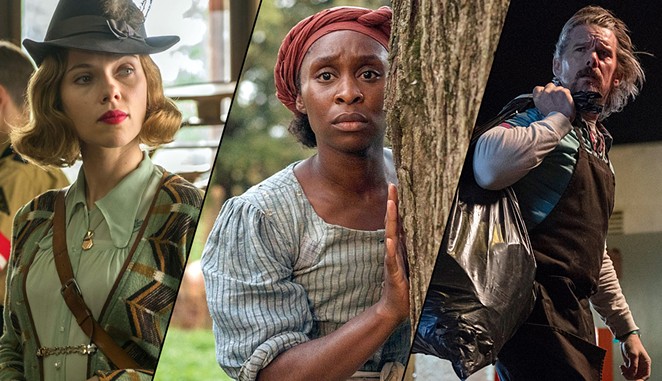 Two-time Oscar-nominated actor Ethan Hawke (Boyhood) stars as Russell Millings, an ex-convict who was put behind bars for 21 years for a low-level drug offense during the early 1990s when the controversial “three-strikes law” was implemented in California. Unfamiliar with the outside world, Russell must start from scratch when he's released from prison at the age of 44. His new life is thrown off course when he finds a newborn in a dumpster and decides the best course of action is to keep her for a couple of days before telling anyone what happened. As far as redemption films go, Adopt a Highway takes a unique angle at giving a character like Russell something to live for. The time he spends with the child, however, is short-lived, so it doesn’t paint a clear enough picture of the man he’d like to become. Soon after the state takes the child, Russell buys a one-way ticket to his hometown of Casper, Wyoming, to visit his father’s grave. Although tender in its presentation, Adopt a Highway feels like a script that needed to be workshopped a dozen more times before trying to place any real emotion on its characters’ shoulders. Actor-turned-first-time-writer and director Logan Marshall-Green gives his debut film an indie-inspired vibe that could transform into something special one day, but as it is now, Adopt a Highway is only a draft of a draft of an idea. Adopt a Highway debuts on demand November 1.

American abolitionist Harriet Tubman's fascinating story is finally told in cinematic form, but it’s far from the biopic she deserves. Co-written and directed by Kasi Lemmons (Black Nativity), Harriet is lifted as high as possible by lead actress Cynthia Erivo (Widows), who portrays the titular 19th century political activist, but there is only so much she can do with Lemmons and co-writer Gregory Allen Howard’s (Remember the Titans) mediocre script. If Harriet does anything noteworthy besides giving Erivo a theatrical platform, which she uses to outperform every other element of the film, it’s that it delves deeper into Tubman’s life and includes details that students wouldn’t find inside their history books. Those details, however, are delivered in such a conventional and ineffective fashion, what should have been a monumental project becomes as forgettable as a made-for-TV biography from the 1990s that ends up on a compilation DVD produced by TV Guide. Add to it a terribly gushy score by Oscar-nominated composer Terence Blanchard (BlackKklansman), and it’s evident that there are more problems with Harriet than its lack of storytelling prowess. Sadly, Harriet is destined to fall under the same category as other inadequate biopics like Cesar Chavez or Hyde Park on the Hudson. Simply put: They're all films that can’t live up to their subjects’ extraordinary lives. Harriet opens at theaters nationwide November 1.

2 out of 5 stars (not recommended)

As much as fans of filmmaker Taika Waititi (What We Do in the Shadows, Thor: Ragnarok) might think they know what they’re getting themselves into when stepping into one of his movies, Waititi’s latest film, Jojo Rabbit, is so much more satisfying than anything the New Zealander has created since making his directorial debut in 2007 with Eagle vs. Shark. Jojo Rabbit feels like a more polished project. It’s still ultimately defined by Waititi’s absurdist humor, but it’s also surprisingly moving. Sure, Waititi’s 2011 adventure comedy Hunt for the Wilderpeople had poignant moments, but not like this. It’s surprising because on paper, Jojo Rabbit shouldn’t really work as well as it does. The story of a 10-year-old German boy named Jojo (Roman Griffin Davis) who interacts with his imaginary friend, Nazi leader Adolf Hitler (Waititi), isn’t what most moviegoers would consider a place to mine for laughs, but in the hands of Waititi, the tonal shifts between political satire, wacky comedy and heartfelt drama blend together in a fulfilling way. Actress Thomasin McKenzie (Leave No Trace) does an incredible job in her role as Elsa, a young Jewish woman hidden during WWII by Jojo’s mother Rosie (Scarlett Johansson) inside their home. When Jojo finds out, he is torn between the love for his mother and his loyalty to the Nazi Party — a loyalty that partially stems from his indoctrination at Nazi youth camp. The camp, led by one-eyed former military leader Captain Klenzendorf (Sam Rockwell), is almost like something straight out of Wes Anderson’s Moonrise Kingdom if it weren’t for all the swastikas. It takes some courage for someone to sit down and write a comedy with fascism at its core, but if anyone is capable of doing it, it's the talented Taika Waititi, who refuses to surrender any part of his vision, so that less people are offended. Jojo Rabbit opens at the Santikos Bijou Cinema Bistro and Alamo Drafthouse Park North November 1.