Here are a few short reviews of movies that will be released at San Antonio theaters and on Netflix from October 4-8.


The Day Shall Come

It’s difficult to see a satirical film today and not quickly compare it to a TV show as funny and popular as Veep. With a series writer like Armando Iannucci, who has proven himself to be one of the most talented satirists working in the entertainment industry in the last decade, one should hope every piece of sarcastic cinema available takes a page from the Iannucci playbook. In The Day Shall Come, there is some connective tissue between the dark comedy and the award-winning HBO series. The film is directed by Christopher Morris (Four Lions), who was behind the camera for a handful of Veep episodes over the last few years, and is written by Jesse Armstrong (TV’s Succession), who wrote one episode of Veep in 2012. It seems as though some of that experience has rubbed off on The Day Shall Come. The film follows Moses Al Shabaz (Marchánt Davis), the small-time leader of a Miami-based Israeli commune that the FBI confuses for a jihadist terrorist cell. All Moses wants to do is have enough money to pay his rent, but when the FBI uses its informants to set a trap, Moses and his faux army find themselves in a series of bad deals to purchase firearms and radioactive material. “Uranium. It’ll put hair on your chest … and make it fall off.” Leading the FBI narrative is Andy (Denis O'Hare) and Kendra (Anna Kendrick), two law enforcement officers who would’ve made a perfect fit working alongside the CIA agents in the Coen’s brother’s 2008 black comedy Burn After Reading. The Day Shall Come opens exclusively at the Santikos Bijou Cinema October 4. 3 out of 5 stars (recommended)


In the Tall Grass

Based on the novella of the same name by iconic horror author Stephen King, In the Tall Grass is a frustrating King adaptation. Maybe that was a deliberate move by writer/director Vincenzo Natali (Splice), so that we could place ourselves in on the same emotional plane as the film’s strayed characters. In the Tall Grass follows brother and sister Becky (Laysla De Oliveira) and Cal (Avery Whitted) who journey into a mysterious field of grass when they hear a young boy (Will Buie Jr.) yelling for help. While the film plays some interesting mind games once inside the grass with space and sound, the screenplay's regard for time is a lot less effective. Becky and Cal become separated and can’t seem to locate the little boy. The closer they get to him, the farther his voice seems to travel. They become twisted up in a labyrinth of mental instability and lush foliage. When more characters are introduced, like Becky’s friend Travis (Harrison Gilbertson) and the boy’s mother (Rachel Wilson) and father (Patrick Wilson), the script, ironically, starts getting lost in the weeds itself. By the time we hack our way out, all the yelling into the abyss feels like a lost cause for everyone involved. In the Tall Grass debuts on Netflix October 4. 2 out of 5 stars (not recommended)

Filmmaker Todd Phillips’ Joker is the wrong movie at the wrong time. It’s the cinematic equivalent of the National Rifle Association holding a rally in a small town the day after said town experiences a mass shooting. Joker pushes the limits of dangerous messaging. It’s the most audacious comic-book-inspired film ever made; one that doubles-down on its depravity with no remorse. That said, it’s impossible not to become hypnotized by its external beauty and indiscriminate brutality. Make no mistake, however, pick at Joker’s scabs and its ugliness will bleed out. Like his role in last year’s hyper-violent thriller You Were Never Really Here, Joker’s overall success begins and ends with Joaquin Phoenix’s Oscar-worthy performance. Written by Phillips (War Dogs) and Oscar-nominated screenwriter Scott Silver (The Fighter), Joker reinvents the origin story of DC’s Clown Prince. Phoenix stars as Arthur Fleck, an aspiring stand-up comedian whose slow decent into madness and willingness to cause bloodshed incite an insurgency led by the less-fortunate citizens of Gotham City who, like Arthur, are tired of being rejected by society. Borrowing heavily from films like Martin Scorsese’s Taxi Driver and The King of Comedy, and other classics like Sidney Lumet’s Network, Phillips and Silver fashion together a script that is both disturbing and flawed. Some detractors will point to the film’s reckless nature and nihilism as a reason to dismiss it, but there is a truthfulness to the film that – while much of the time mean-spirited – also speaks to the detachment and decay of the world we inhabit. Moviegoers might not appreciate Joker’s attempt to kick us out of our collective coma, but at least it demands viewers feel something – even if that something is as frequently unpleasant as a homicidal clown doing very bad things. Joker opens nationwide October 4. 3.5 out of 5 stars (recommended) 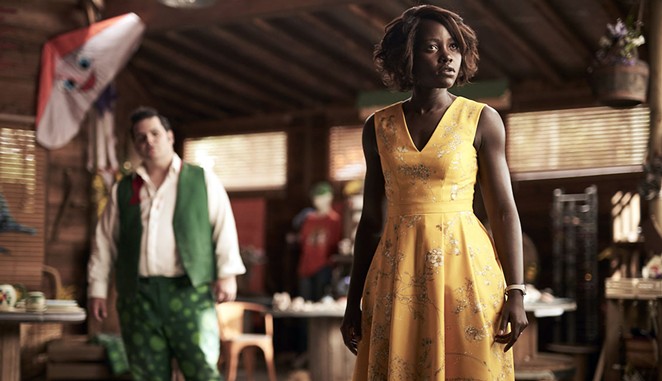 There's only so much a filmmaker can do with a zombie movie that hasn’t been done before. With Little Monsters, Australian writer/director Abe Forsythe (Down Under), unfortunately, doesn’t accomplish much with his ensemble of undead. It's an unnecessary addition to the usually tired sub-genre, which hasn’t produced a solid horror-comedy since 2009’s Zombieland. The film might benefit from having Oscar-winning actress Lupita Nyong’o (12 Years a Slave) in the lead role, but aside from her presence and total dedication, Forsythe’s script lacks creativity. Nyong’o stars as Miss Caroline, a ukulele-wielding kindergarten teacher who teams up with Dave (Alexander England), the annoying and love-struck uncle of one of her students, to save her class from a zombie attack during a field trip. As irritating as England’s character is, he’s no match for actor Josh Gad’s vile role as Teddy McGiggle, a seemingly friendly children’s TV show host who looks like he was pulled straight from the Capitol of The Hunger Games franchise. Teddy’s true colors show when the zombies start to attack and he reveals that the only thing that matters to him is his own survival. From there, Forsythe’s only real go-to move is having a strung-out Teddy drop f-bombs on the kids who think the chomping zombies are just part of a game they’re playing. If you think cussing at 5-year-old is the Holy Grail of comedy, Little Monsters might be for you. If you want your zom-rom-coms to be more in the vicinity of something like Shaun of the Dead, we’re miles away from that standard. But at least we get a Taylor Swift cover on the ukulele, right? Little Monsters opens exclusively at Regal Huebner Oaks for a one-night-only screening October 8 at 7:30 p.m. followed by a VOD release on October 11. 2 out of 5 stars (not recommended)