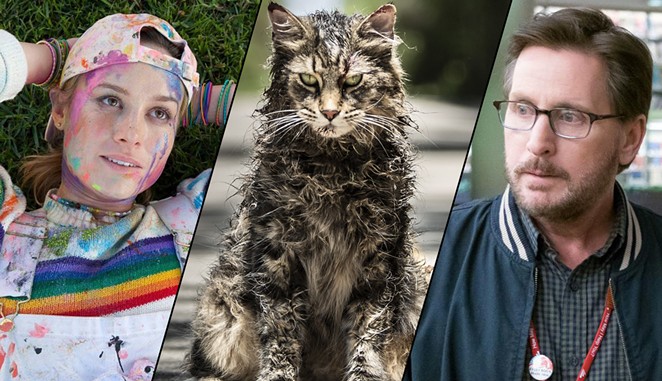 Here are a few short reviews of movies that will be released on April 5 in San Antonio theaters or on Netflix.

As inconsistent as Stephen King cinematic adaptations have been over the last 40 years, the best-selling author of all things horror and supernatural has stayed relevant ever since his 1974 novel Carrie was made into a film of the same name two years later. Since then, King, who continues to create new work, is benefiting from the fact that Hollywood loves when it can remake something for a new generation – the aforementioned Carrie in 2013, the first chapter of It in 2017 and now Pet Sematary, exactly 30 years after the original horror movie hit the big screen. In the new version, screenwriters Matt Greenberg (1408) and Jeff Buhler (The Prodigy) take some creative license and change up the 1989 film just enough to make it feel like the adaptation lives in its own world, especially in the third act where directors Kevin Kölsch (Starry Eyes) and Dennis Widmyer (Starry Eyes) ask some frightening questions about morality and the afterlife. They give depth to their lead characters Louis and Rachel Creed (Jason Clarke and Amy Seimetz), parents who move their young daughter and son from Boston to rural Maine where they learn a pet cemetery is located on their property. When the Creeds’ neighbor Jud (John Lithgow) shows Louis the true power of the woods, Louis must make a decision that blurs the lines between life and death. In many ways, the new Pet Sematary is an improvement on King’s text and matches the original’s chilling atmosphere. It doesn’t reinvent the genre in any way, but the most unsettling scenes will definitely find a way to seep under the skin. Pet Sematary opens nationwide at a theater near you April 5.
3 stars out of 5 stars

In his first feature film as a director since his underappreciated and underseen 2010 drama The Way, which starred his real-life father and actor Martin Sheen, actor/filmmaker Emilio Estevez assembles a diverse ensemble cast in The Public, an admirable but unsubstantial piece of social commentary that packs little punch. Set in Cincinnati, Estevez stars as Stuart Goodson, a librarian whose humanity is tested when a large group of homeless men protest the city’s limited shelters by staging a sit-in afterhours inside the public library, so they won’t die outside in the frigid temperatures. Stuart, who is on the cusp of being fired from his job after asking a regular library visitor to leave the building after getting complaints about his body odor, joins the demonstration. The sit-in goes viral when the media inaccurately describes it as a hostage situation. While the main storyline about the disregard for the homeless is one that comes with deep-seated sentiment, The Public steps on its own message by focusing much of its energy on a handful of inferior narratives like Stuart’s love interest Angela (Taylor Schilling) waiting outside the library for the standoff to end; police negotiator Bill Ramstead (Alec Baldwin) searching for his drug-addicted son; and mayoral hopeful Josh Davis (Christian Slater) throwing unnecessary tantrums at the scene of the resistance. There's an inspiring story hidden somewhere inside Estevez’s two-hour-long outcry that demands attention from city officials nationwide. The Public, however, fails to fully realize this and dilutes the narrative until its true intent is lost. The Public opens at Santikos Silverado and Regal Cielo Vista April 5.
2.5 stars out of 5 stars

Imagine a place where someone can go and buy their personal true meaning of happiness. What would a place like that look like and what item would provide that sense of eternal elation? In Unicorn Store, Oscar winner and first-time director Brie Larson (Room) explores the intriguing idea that happiness is only a purchase away, especially if it’s something that fills in a missing piece of one’s individuality. Larson stars as Kit, an aspiring artist who seems to be suffering from both Peter Pan syndrome and Failure to Launch syndrome, an interesting idea in itself since these two disorders are usually saved for the boys to experience in movies. When Kit receives a mysterious invitation to visit a placed called “The Store,” she makes the trip and meets The Salesman (Samuel L. Jackson), who tells her that he can arrange for her to own a real-life unicorn, a mythical creature she’s loved ever since she was a little girl. While on paper, the concept behind Unicorn Store seems whimsy for the sake of being whimsy, there’s a deeper meaning behind screenwriter Samantha McIntyre’s (TV’s Married) silly script that attempts to paint a touching picture of what it’s like to feel special and unconditionally loved. Those ideas, however, never add up to any real revelations for Kit or the secondary characters she allows herself to befriend. Unfortunately, Unicorn Store, with as much charm and glitter as it tries to dispense, is the cinematic equivalent of an empty Lisa Frank Trapper Keeper. Unicorn Store debuts on Netflix April 5.
2.5 stars out of 5 stars