Cinematic Spillover: Short Reviews of Scary Stories to Tell in the Dark, Dora and the Lost City of Gold and More

Here are a few short reviews of movies that will be released in San Antonio theaters or on VOD platforms August 9. Two more films opening August 9 at the Santikos Bijou – Light of My Life (3.5 out of 5 stars) and Them That Follow (2.5 out of 5 stars) – will run as full reviews online and in print next week.


Dora and the Lost City of Gold 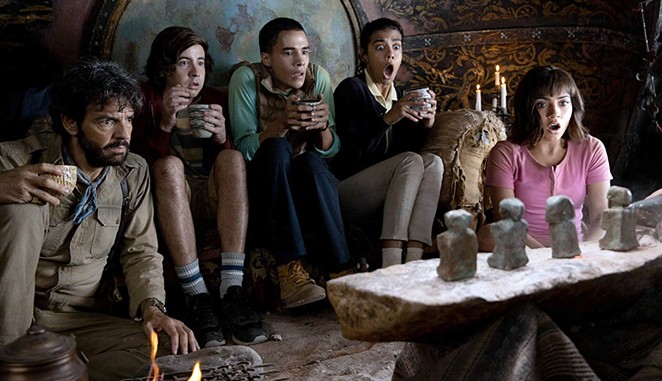 Whether you grew up watching the animated TV series Dora the Explorer yourself or were the parent of a child who appreciated the bilingual show on Nickelodeon, one can’t argue about the educational value it brought to the landscape of kids’ entertainment during its eight-season run. Surprisingly, the respectable programming translates far better than most animated TV shows-turned-movies have in a long time. In fact, critics would be hard-pressed to come up with even a handful of cartoon titles that adapted well into live-action counterparts in recent years – from the horrible Smurfs and Alvin and The Chipmunks film franchises to forgettable projects like Scooby-Doo and The Last Airbender. Sadly, kids have been getting the short end of the cinematic stick for a while. Luckily, Dora and the Lost City of Gold moves the needle in a positive direction. Directed by James Bobin (The Muppets), the young Latina pioneer sets off on a new adventure that is fresh, silly and fun. It’s like Indiana Jones for second graders. With Bobin at the helm and with a screenplay written by Matthew Robinson (The Invention of Lying) and Nick Stoller (Get Him to the Greek), Dora and the Lost City of Gold is a very self-aware family comedy that is both sweet and occasionally sarcastic. Moner embraces the role with such sincerity, it’s easy to smile along and enjoy something that isn’t hesitant to be this wholesome. Dora and the Lost City of Gold opens in theaters nationwide August 9. 3 out of 5 stars Ode to Joy

British actor Martin Freeman (TV’s Sherlock) stars as Charlie, a Brooklyn-based librarian who suffers from narcolepsy with cataplexy, a neurological disorder that causes him to pass out whenever he feels an emotion as strong as anger, surprise, fear and, especially, happiness. To stop this from happening, Charlie makes a conscious decision to avoid any in his life that might cause him to feel joy (things like puppies, babies and good Samaritans make his knees buckle). “Think unhappy thoughts,” his brother Cooper (Jake Lacy) tells him at the beginning of the film when Charlie almost passes out at his sister's wedding. When he meets Francesca (Moren Baccarin), however, he is forced to confront his condition and decide if falling in love is worth actually falling. Based on the true story of a man named Chris Higgins, Ode to Joy is a charming romantic comedy that hits all the right buttons. Chris’s original story, “I’ve Fallen in Love and I Can’t Get Up,” aired on the radio in 2010 on This American Life, which was a great show all on its own, but the stranger-than-fiction, cinematic version – with Freeman and Baccarin’s natural chemistry and a scene-stealing performance by actress Melissa Raunch (TV’s The Big Bang Theory) as Charlie’s substitute girlfriend – is adorable and very funny. Ode to Joy hits VOD platforms August 9. 3.5 out of 5 stars

Scary Stories to Tell in the Dark

If Scary Stories to Tell in the Dark was a junior high Halloween carnival attraction, it would be the haunted house set up in the gym and sponsored by the band booster – cheesy to a fault, but just creepy enough to get the most panicky 11-year-olds to occasionally cover their eyes. Based on a best-selling collection of short horror stories from the '80s and early '90s written for children, Scary Stories doesn’t age well, even with Oscar-winning director/producer and Oscar-nominated screenwriter Guillermo del Toro (The Shape of Water) dipping his hand in the cauldron. The film is actually directed by André Overdal (The Autopsy of Jane Doe), but del Toro’s fingerprints are all over the project as a co-writer and co-producer. The main problem with Scary Stories is that the stories themselves aren’t very compelling, even for tweens. Sure, back in the '80s, a spooky movie about a scarecrow or a corpse looking for a missing toe might register with audiences, but in 2019, these narratives feel obsolete. Nostalgia is a powerful thing, so maybe they’re good enough for those Gen-Xers who remember reading the books as kids. But for everyone else, they’re stories best left told around a campfire in the middle of the woods with a s’more in hand. Scary Stories to Tell in the Dark opens in theaters nationwide August 9. 2.5 out of 5 stars