Cinematic Spillover: Short Reviews of The Boy Who Harnessed the Wind, The Iron Orchard and More

Here are a few short reviews of movies that will be released between March 1-5 in San Antonio theaters, on streaming services or on VOD.

The Boy Who Harnessed the Wind

Oscar-nominated actor-turned-director Chiwetel Ejiofor (12 Years a Slave) makes a meaningful feature film debut behind the camera with The Boy Who Harnessed the Wind. The British narrative tells the inspirational true story of William Kamkwamba (Maxwell Simba), a young boy living in southeast Africa who helps his economically-strapped village by inventing a wind turbine to bring water to its dry fields. Most of the film covers the hardships the villagers must face as their inefficient government fails them at every turn, so William’s “experiment” doesn’t start taking shape until the last half hour, but before then, Ejiofor, who also adapted Kamkwamba’s original memoir, creates a powerful sense of desperation for his beautifully-written characters to struggle and fight against. With impressive performances by the entire cast, especially Simba and Ejiofor, whose complex father-son relationship is the soul of the picture, The Boy Who Harnessed the Wind is a touching drama that has the ability to lift audiences up. The Boy Who Harnessed the Wind hits Netflix on March 1.
3.5 stars out of 5 stars 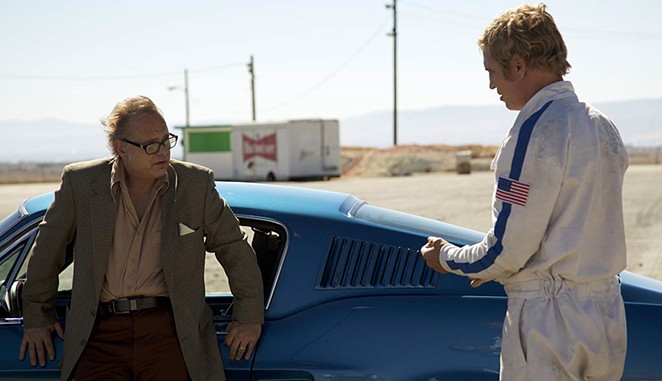 When you're a filmmaker and the only thing you really having going for your biopic on iconic actor and racecar driver Steve McQueen is the fact that your lead actor actually looks like Steve McQueen, you're in for a rude awakening. Such is the case for writer/director Joe Eddy (Coyote) and Chasing Bullitt, an amateurishly-made film on McQueen set in 1971, three years after he starred as the title character in the crime thriller Bullitt, which is known for one of the greatest car chase scenes in movie history. In Chasing Bullitt, actor Andre Brooks (TV's Ray Donovan) portrays McQueen, a man examining his life and sending his agent on a special assignment: to track down the missing Mustang he drove in the classic movie. It turns out to be a weak setup for Eddy's dull and unfocused script, which puts McQueen in a therapist's office talking about his failed marriage and on a road trip with an annoying hitchhiker who can't stop calling him by his full name for some reason. The nonlinear narrative spins in circles and is atrociously edited. Brooks has a few moments where he is able to show his talent, but it's a moot point when the storytelling is this bad. Chasing Bullitt hits VOD on March 5.
1 star out of 5 stars

Set in Midland County, Texas, in 1939, The Iron Orchard tells the story of Jim McNeely (Lane Garrison) a man looking to start a career in the West Texas oil fields after his girlfriend’s mother tells him he’s not good enough to marry her daughter. Through flashbacks, Jim thinks about the happiness he once had and wonders how he’s going to survive the backbreaking work long enough to realize his dream of digging his own well. Jim’s life gets complicated when he falls for the boss’s wife Lee (Ali Cobrin). Directed by Ty Roberts (Four Aims and Flyin’ Shoes) from a hokey and cliché script adapted by Gerry De Leon (Opening Night), The Iron Orchard feels hopelessly unauthentic as we watch Jim rise to power in the oil industry with little effort. It’s obvious Roberts thinks he has an epic in his hands, but with underwritten characters and relationships, second-rate dialogue and an oil story that goes nowhere interesting, The Iron Orchard strikes nothing of substance. The Iron Orchard opens at Santikos Bijou and Santikos Embassy on March 1.
2 stars out of 5 stars