Cinematic Spillover: Short reviews of The Outpost, Hamilton and The Truth 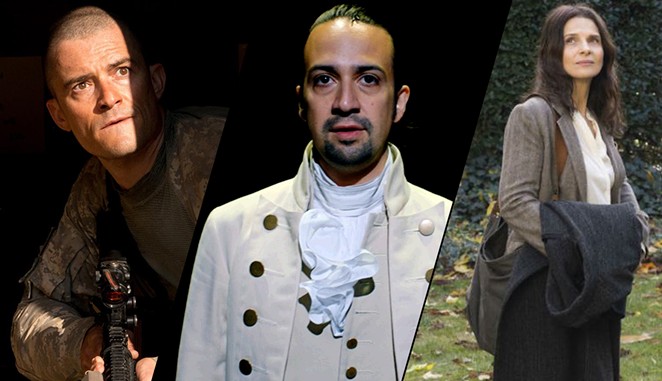 Happy Fourth of July weekend! We're sure the 1996 sci-fi blockbuster Independence Day will likely play in your house sometime over the next few days, but also try watching one of these new releases that will hit theaters (wear a mask!) and VOD platforms this week. Here are a few short reviews of Hamilton, The Outpost and The Truth.

Never seen Hamilton on Broadway? As we’re sure most people in the world have not, including this critic, one can only assume that a recording of the cultural phenomenon would be the next best thing. If that’s truly the case, seeing Hamilton live on Broadway must be a life-changing experience because the Disney+ version of the hit musical is nothing short of glorious. Created by talented songwriter and entertainer Lin-Manuel Miranda, Hamilton debuted on Broadway in 2015 and received critical acclaim throughout its run, including a Tony Award for Best Musical and a Pulitzer Prize for Drama in 2016. Hamilton tells the story of the birth of the United States through the eyes of Founding Father Alexander Hamilton (Miranda). Using a cast of mostly non-white actors who sing and perform to hip-hop, R&B and other non-traditional music for the Broadway stage, the play includes several key characters in American history like George Washington, Thomas Jefferson, James Madison and Aaron Burr, who kills Hamilton during a duel in 1804. In the cinematic stage production, which is likely a transitional step to a full feature film, the original cast returns and lights up the stage alongside stunning set design and costumes and an original soundtrack that surpasses all expectations. Hamilton is available on Disney+ July 3. 4 out of 5 stars (highly recommended)

San Antonio, AKA Military City, USA, loves its war movies. Even overrated films like 2013’s Lone Survivor and 2014’s American Sniper will bring local fans out in droves. Luckily, the latest in the genre, The Outpost, comes with less Hollywood sheen. Based on the 2012 book The Outpost: An Untold Story of American Valor by CNN’s Jake Tapper, the narrative follows the American soldiers who fought against a force of 300 Taliban during the Battle of Kamdesh in Afghanistan in 2009. Because of the terrain and how the American base was positioned in a valley, the battle ended up being one of the bloodiest that American forces saw during the war at that time. Directed by Rod Lurie (The Contender), The Outpost is a no-holds-barred experience that puts viewers in the center of the firefight. There is little emotional connection to the soldiers themselves, besides the tidbits of personal information they share with their comrades, but the surface-level reactions we witness are palpable. The fear, anger, passion, pride and patriotism exudes from each character as the battle rages on. Actors like Scott Eastwood (Snowden) and, especially, Caleb Landry Jones (Get Out) are more than capable of capturing that mindset. More than half of the film’s run time is of the actual battle, so viewers who would rather see full-on combat rather than the tactical planning of a war won’t be disappointed. The Outpost opens at local Santikos Theatres and on VOD platforms July 3. 3 out of 5 stars (recommended)

If you’re not familiar with the work of Japanese writer/director Hirokazu Koreeda (Shoplifters), seek out his films as soon as possible. Ninety-five percent of everything he’s made since his career started in the mid-90s is elegantly made and emotionally complex. The Truth, Koreeda’s first film not set in Japan and not in Japanese, is no exception. The film, which is mostly in French, stars Oscar winner Juliette Binoche (The English Patient) as Lumir, a screenwriter who travels from New York City back to her home in Paris to celebrate the release of a memoir written by her famous actress mother Fabienne Dangeville (French legend Catherine Deneuve). While there, mother and daughter must examine their complicated relationship as Lumir notices that her mother has fabricated parts of her autobiography. Lumir, along with her husband Hank (Ethan Hawke) and young daughter Charlotte (Clémentine Grenier), are also given the opportunity to join Fabienne on the set of her new movie to watch her in her natural setting. The Truth is a film about memory and the depths Lumir and Fabienne are willing to go to find the root of their regrets with one another. Koreeda does a masterful job as a storyteller, layering the intricate viewpoints of each character in a way where viewers can see the entire picture and decide for themselves what is fact and fiction. Anchored by two amazing performances by Binoche and Deneuve, who are locked into an emotional clash years in the making, The Truth is an intimate, moving and, ironically, honest domestic drama for lovers of foreign cinema. The Truth opens at the Santikos Embassy Theatre and on VOD platforms July 3. 3.5 out of 5 stars (recommended)