Cinematic Spillover: Short reviews of The Painted Bird, The Homefront and Showbiz Kids 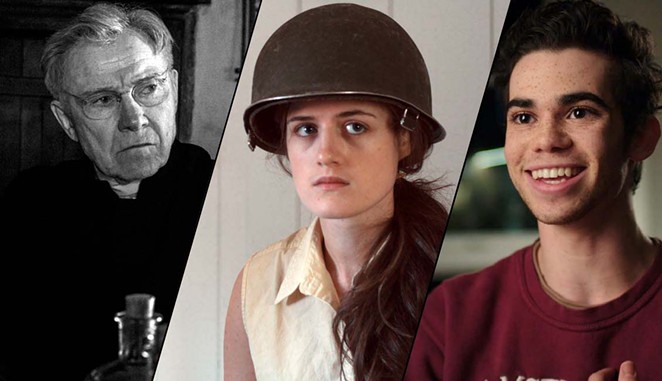 Some movie theaters in San Antonio are open, so if you decide to venture out, please wear a mask and social distance. The more we follow common-sense guidelines, the quicker we can put COVID-19 behind us and get back to the theater for some of the big, new releases that haven’t been rescheduled for next year. Until then, here are three movies that recently hit VOD platforms, Amazon Prime and HBO. All are recommended.

Somewhere on the outskirts of rural America, an impending military invasion is on the minds of a family hunkered down in their ranch home. It’s the setup to co-writers/co-directors Fidel Ruiz-Healy and Tyler Walker’s debut feature film, The Homefront – a sincere, minimalist drama that feels effortless in its execution. Shot in 2011 but self-distributed only recently, Ruiz-Healy and Walker explore a scenario where the United States has been occupied by another country for eight years, much like the U.S. military does around the globe today. How would a family react if placed in this situation? In The Homefront, they continue quietly living inside their sheltered space and wondering what the next day will bring. Caroline (Rachel Povse) spends her time riding her bicycle around the property. She mostly keeps to herself while her older brother Douglas (Gerry Eddins) tries to contact people on his ham radio and regularly tests the water to make sure it’s still drinkable. Their parents, James (David Laurence) and Cindy (Lindsey Van de Kirk), and uncle Paul (John Wirt), also inhabit the house and gather dust much like their old-timey furniture. While The Homefront can feel aimless at times – a dilly-dallying drama, perhaps – there is an earnestness to Ruiz-Healy and Walker’s narrative that keeps the momentum moving forward at a consistent pace. Of all the characters, Povse’s Caroline is easily the most compelling – a slightly rebellious teenager who knows nothing of the outside world but is determined not to become as stagnant as the rest of her family. With Caroline, hope for a new beginning seems attainable, despite the bleak atmosphere engulfing them like an unseen chemical agent. Composer Chris Ruenes livens things up, too, with a percussion-heavy score that is playful and offbeat. Cinematographer Margaret Parus uses a desaturated color palette to create a vintage look for a world on the brink of war. The Homefront is available on Amazon Prime. 3 out of 5 stars (recommended)

Czech filmmaker Václav Marhoul’s The Painted Bird is one of the most disturbing WWII-era films to come around in a while. Based on author Jerzy Kosiński's controversial 1965 novel of the same name, the black and white Czech film follows an unnamed, 6-year-old Jewish boy, who is sent by his parents to live with his elderly aunt in a war-torn Eastern European village near the end of the war. When his aunt dies, the boy sets off on a harrowing journey home during which he encounters various types of people, including a bird breeder who treats him well, but is distracted by a sexually deviant woman; a pedophile who threatens to kill him if he tells a local priest that he is being raped; and a Nazi soldier tasked to execute him. If that already sounds like too much to handle, The Painted Bird, which clocks in at two hours and 49 minutes, is not a road you will want to travel. It’s a visceral nightmare that is equal parts brutal and beautifully photographed. Czech cinematographer Vladimír Smutný captures the inhumanity through elegant camerawork and uncompromising violence. The film is about the ultimate suffering of one child who fights for his survival by any means necessary. As the boy, non-actor Petr Kotlár gives a stunning performance much like non-actor Zain Al Rafeea did last year playing a young Syrian refugee in the Lebanese drama Capernaum. Kotlár holds his own in scenes with veteran actors like Stellan Skarsgård, Udo Kier, Harvey Keitel, Julian Sands and Barry Pepper. Overall, The Painted Bird is a tragic, soul-crushing experience that – even if admired by viewers – will likely never be revisited again. The Painted Bird is available on VOD platforms and opens at the Santikos Embassy Theatre July 17. 3.5 out of 5 stars (recommended)

The HBO documentary Showbiz Kids doesn’t disclose much that you haven’t heard before about the negative side of children working in Hollywood – from drug addiction to overbearing parents to sexual abuse – but listening to all the actors brave enough to talk about their personal experiences creates a powerful platform nonetheless. Director Alex Winter (Downloaded) produces a well-packaged collection of testimonials from several actors, including Henry Thomas (E.T.), Wil Wheaton (Stand by Me), Evan Rachel Wood (Thirteen), Mara Wilson (Mrs. Doubtfire) and the late Cameron Boyce (Descendants franchise). Each speaks candidly about what it was like being employed in the cutthroat entertainment industry as children. While every subject has a noteworthy story to tell, it’s Wood’s interview that is the most revealing, not because she delivers salacious details about her past, but because she takes the time to analyze the impact her life under the spotlight has had on her as an adult and the emotional implications that childhood stardom can have on someone so young. It’s a conventional but important doc, especially for those families who dream of fame for their talented tots. Showbiz Kids is available on HBO and HBO Max. 3 out of 5 stars (recommended)